Remember the Sabbath day by keeping it holy. Six days you shall labor and do all your work, but the seventh day is a sabbath to the LORD your God. On it you shall not do any work, neither you, nor your son or daughter, nor your male or female servant, nor your animals, nor any foreigner residing in your towns. For in six days the LORD made the heavens and the earth, the sea, and all that is in them, but he rested on the seventh day. Therefore the LORD blessed the Sabbath day and made it holy. (Exodus 20:8-11) 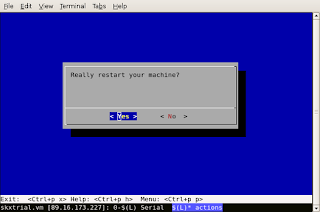 My wife and I had a conversation yesterday that we wouldn't have had ten years ago. That no one would have had twenty or twenty-five years ago.

The conversation was about whether or not to bring a laptop on our family's Spring Break trip next week. The arguments for bringing the laptop are that our son can watch movies on it in the car on the drive, and that we can stay connected to email and the internet. It would also be handy for me to get some work done if we have some downtime.

The arguments for not bringing the laptop are, not coincidentally, the same.

Don't you like the beer commercial where the guy is sitting on the beach, skipping rocks in the surf, just doing nothing and having a wonderful time? Then his cell phone rings, and he picks it up and looks at it for a moment. He's thinking about answering, but then he throws the cell phone out into the surf, skipping it across the water like just another stone.

What they don't show you is him a minute later, splashing around in the water desperately trying to find the device.

It's a familiar problem. We want to be connected. Need to be connected. We feel the need to be able to communicate with the people in our lives quickly, conveniently, inexpensively, and instantly.Well, we didn't create the wireless, online, smartphone world we inhabit, did we? We just live here, and to live here we have to play by its rules. And that means having a computer in your pocket that's exponentially more powerful than the ones that filled entire rooms just a generation or two ago. Or lugging a laptop on a six-hour car trip.

At least one organization, though, is choosing not to play by the rules of the world we inhabit. At least one day a week.

The group's name is Reboot. They're devoted to reinventing the traditions and rituals of Judaism for secular Jews. Chief among those traditions and rituals is the millennia-old observance of the Sabbath, the seventh day as a day of rest. And their primary way to observe the Sabbath? That's right – turning off their cell phones, computers, and other devices. Rebooting, if you will – the devices, yes, but also hopefully their own hearts, minds, and souls.

Among other things, the group suggests that people who want to “reboot” should avoid technology from sundown on Friday until sundown on Saturday. They should connect with loved ones, nurture their health, get outside, and avoid commerce. They also suggest lighting candles, drinking wine, eating bread, finding silence, and giving back.

I think Reboot might be on the right track. While technology can be a wonderful thing, it's hard to deny that we can become slaves to it. If we're not careful, technology can start to use us instead of the other way around. When interacting with a cell phone or a computer becomes a larger part of our lives than interacting with people, it's a sure bet that something is out of balance.

And, if you're wondering, I do see the irony in my typing these words on a computer keyboard, intending to upload them to the internet.

Originally, Israel's Sabbath laws had to do with acknowledging the holiness of God by breaking the rhythm of day to day life. Once every seven days, they were required to stop the “essential” business of living – and making a living – simply because their God said they should. Sabbath was to remind them that in the end it wasn't their strength or cleverness or work ethic or technological advances that sustained their lives. It was God, and God alone.

By Jesus' time, it had become something else. It was, at least for some people, a measuring stick for piety. And those people had ruined it for everyone else, making it into a burden that had to be endured, a regulation that chafed and restricted. When Jesus healed the sick on the Sabbath, for instance, there were those who protested that he couldn't be doing God's work because he was working on the Sabbath.

That's why Jesus said things like, “the Sabbath was made for people, and not people for the Sabbath.” (Mark 2:27) That's why, once when he healed a woman on the Sabbath, he quieted those who protested by saying, “Doesn’t each of you on the Sabbath untie your ox or donkey from the stall and lead it out to give it water? Then should not this woman, a daughter of Abraham, whom Satan has kept bound for eighteen long years, be set free on the Sabbath day from what bound her?” (Luke 13:15-16) Jesus understood that God didn't need us to stop work and remember him, but that we need that. Human beings need the reminder that we depend on God. That we can work and slave and hope for – well, in that woman's case, for eighteen years – but that in the end we're utterly dependent upon our God.

And that's where Reboot gets it wrong. They want to reclaim Sabbath for those who are secular. But Sabbath isn't secular. The whole point of it is to disrupt the secular and give us room to come before God. Lighting candles, eating bread and drinking wine, getting outside – even connecting with loved ones and giving back – none of that will adequately fill the empty space that Sabbath creates in our calendars because none of it will fill the empty spaces in our hearts. Only God does that, and Sabbath without him is just a day off.

So by all means, reboot. Jesus did. (Luke 4:16) Turn off the devices, lock up the office, leave the errands for another day. Reconnect with loved ones – that's almost always a good thing. Serve those in need – Jesus did that, too. But do Sabbath the way Jesus did it. Be with God. Be with his people. Spend an afternoon in prayer. Or take a long, leisurely walk, talking with God as you go. Meet with the church to worship. Sing a song of praise with your kids while you wash your wife's car. Whatever you do with your Sabbath, include God.