But our citizenship is in heaven. And we eagerly await a Savior from there, the Lord Jesus Christ, who, by the power that enables him to bring everything under his control, will transform our lowly bodies so that they will be like his glorious body.
Therefore, my brothers and sisters, you whom I love and long for, my joy and crown, stand firm in the Lord in this way, dear friends! (Philippians 3:20-4:1) 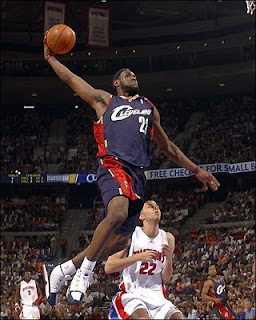 His coming has been long anticipated. Millions have placed their hope in him. In hard times, they look at the signs and wonder, “Could this be the time?” They talk about his arrival with a mixture of impatience, joy, and expectation that you can see in their eyes and hear in their voices. The hope of his coming gives them reason to live, reason to struggle through the darkness and pain, reason to believe.

“If only LeBron James comes to Chicago,” they say, “the Bulls will be great again.”

I'd explain that LeBron James is a basketball player, but you probably already know that. You probably also already know that his contract with his team, the Cleveland Cavaliers, expired at 12:01 AM on July 1st. That's when all the excitement and hype really started. But it's been building for a long time, particularly here in Chicago, where our NBA team, the Bulls, has a chance of signing him. When the Cavaliers played here last season, Bulls fans brought signs begging LeBron to come to Chicago. It's all over sports radio in the city. Everyone's asking each other, “Do you think LeBron will sign with the Bulls?” One of our newspapers even has a daily feature tracking LeBron's meetings with other teams, and speculating on what the Bulls will say and promise when they get the chance to meet with him Saturday.

Short of offering Oprah as his personal shopper or cutting off the head of the Michael Jordan statue in front of the United Center and replacing it with his, it sounds like pretty much anything is on the table.

I bet they'd even let him pitch for the Cubs. Couldn't hurt.

Still, nothing has beaten New York mayor Michael Bloomberg for sheer hysteria. The Knicks would like to employ LeBron as well, and Bloomberg recently made a video in which he urged LeBron to come to the Big Apple in (literally) biblical language: “As the good book says, 'Lead us to the Promised Land.' And that's a quote from the King James Version.”

King James. Get it?

As a sports fan, I understand. I do. As a (transplanted) Bulls fan, I even hope he comes to Chicago. I'm buying into the hype, reading the newspaper, listening to sports radio in the car. But, then again – oh, come on! LeBron James is not Moses, come to lead us out of the wilderness. He's an entertainer, blessed with enough talent to amazing things with a basketball. Inside of a decade, all the news will be focused on his retirement. Fans of whatever team he's playing with at that time will have to look elsewhere for their hope. An NBA championship or two or three. More money in ticket sales and concessions and merchandising pumped into the team, the league, the city for a little while. But, as is always the case with human beings, in the end his coming to whatever city he winds up choosing will matter very little in the long run. Sooner or later things will go back to normal and the hype will be a memory, until it's forgotten: supplanted by other hopes, other hype.

What we hope for is that Jesus will come. We've just forgotten – or maybe we've never known – why.

Paul thinks of the church as a colony of heaven. While our physical location is here, in this world, among its people and customs and values, he says our true homeland is there, in heaven, where God and Jesus are. He doesn't mean, of course, that heaven is just another geographical location; he's more interested in making a point about where our allegiance, faith, and ultimately our hope are. We belong to God's kingdom. Our citizenship is with him. The customs we follow are the customs of our king, and the law to which we're subject is his law. And all the hope we have of being rescued from all the things that threaten us is in him: that he's good and powerful and faithful to his people who trust in him.

And so “we eagerly await a Savior from [heaven], our Lord Jesus Christ.” As believers in Jesus, our hope narrows down from abstract dreams like resurrection, forgiveness, justice, and the absence of death and sin and fear to something far more concrete. Someone, in fact. Like sports fans in my city today, we look forward to someone's arrival. And his arrival will mean that all those things we long and dream and hope for are being made real. The dead will rise to greet him, alive again forever. Those who trust in strength and power and force and manipulation will be overthrown. It will be the end of alienated families, barren and broken marriages, crumbling neighborhoods, and bloody battlefields. It will be the end of disease, poverty, famine, and drought.

The one we wait for, Jesus, will bring everything under his control when he comes. Even those things that seem so out of control now. Even us – he'll transform the people we are now, with our out-of-control wants and chaotic hearts, into the people God always intended for us to be. We'll be a lot like Jesus, in fact.

So we have hope, always, because our hope doesn't lie in our circumstances improving or a disease going into remission or even a basketball player coming to our city. It's in Jesus – that the One who suffered and died for us will come one day to make us brand-new, along with the rest of creation. We stand firm in that hope.

Whether What's-His-Name shows up or not.