Shortly before dawn Jesus went out to them, walking on the lake. When the disciples saw him walking on the lake, they were terrified. “It’s a ghost,” they said, and cried out in fear.
But Jesus immediately said to them: “Take courage! It is I. Don’t be afraid.”
“Lord, if it’s you,” Peter replied, “tell me to come to you on the water.”
“Come,” he said.
Then Peter got down out of the boat, walked on the water and came toward Jesus. But when he saw the wind, he was afraid and, beginning to sink, cried out, “Lord, save me!”
Immediately Jesus reached out his hand and caught him. “You of little faith,” he said, “why did you doubt?” (Matthew 14:25-31) 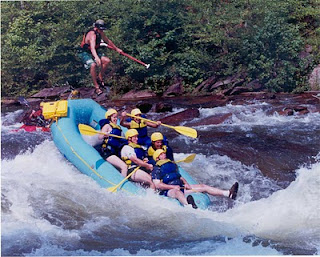 This week, I took the risk of “riding the bull.” Not an actual bull, you understand. (That's a little past my acceptable threshold of risk.) It's something you do in whitewater rafting – the term for sitting on the very front edge of the raft as you go through the rapids. It leaves you vulnerable, easily thrown from the raft. It's a risk, in other words.

Before you get the impression that I'm a daredevil, understand that Ben, our guide, gave me the idea. He told me it would be OK. It was a relatively safe stretch of rapids, he told me. He told me how to do it. He had made a couple of hundred runs down that stretch of river. Even though I didn't know him before our raft trip I knew that it would look bad for him if he lost a customer. And since I trusted Ben, I was willing to give it a try.

I also trusted the other people in my raft. Besides Ben, there was my wife, my son, my parents, and my sister. I figured it was a safe bet that there was no one in that raft who wanted me lost in the Ocoee River. I knew they'd help pull me in. I knew I wasn't alone, and it made the risk more acceptable.

And then I had the safety gear on: the helmet and the life vest. If my noggin bounced off a rock, the helmet would protect me. If I went into the drink, the vest would keep me afloat. I was as protected as I could possibly be.

So I gave it a shot. I climbed up on the edge of the raft and dared the river to knock me off.

And, as seems obvious in hindsight, the river obliged.

But after a few moments of shooting down the rapids on my back, the people I put my trust in came through. Everybody in my raft rowed, and the vest and helmet kept me afloat and protected, and Ben grabbed the shoulder straps on my vest and hauled me into the boat. I was wet, a little tired, but none the worse for wear. And now I have a great story to tell.

That's the thing about risk. It's, well, risky.

Of course, it's also part of life. When you quit a job for what seems like a better opportunity, there's always a risk that new opportunity won't work out, or won't be what you thought it was going to be. When you take over a difficult project, there's a chance that you'll succeed and impress everyone. There's also the risk you'll fall all over yourself and wind up looking incompetent. But sometimes you have to take risks, don't you? Think of all the amazing discoveries and inventions that never would have happened if someone hadn't taken the risk and ridden the bull.

And sometimes responsibility demands that you take a risk. It's risky to warn someone you love about the self-destructive behavior they're engaging in. They may not take it well, but you have to take the risk, don't you? It's risky to speak out when you see someone being taken advantage of. But the moral imperative is too strong to let it go unchallenged. It's risky to share your faith with someone who doesn't believe in Jesus, isn't it? But the grace of God is too compelling to stay safe and silent.

Peter was willing to ride the bull. On a windy night out on the Sea of Galilee, he paused from trying to get the little boat he and the other disciples were sharing to shore. He looked up to see Jesus, walking across the choppy water toward the boat. And the only thing he could think was that he wanted to do that, too. “Tell me to come to you on the water,” he asked Jesus. And Jesus told him to come.

A risk, for sure. Logically, you'd expect that if he left the relative safety of the boat to step into the waves, he'd drop like a stone. But Jesus told him to come, and therein lies the lesson. If Jesus tells you to take a risk, you can take it. If you can hear the call of God in the risk you're considering, then step up and ride the bull. Step out onto the water. However foolish the risk may seem, it's no risk if God calls you to it.

That's the thing, isn't it? How do you know? Short of a voice from Heaven, how can you tell whether a risk is God's will or your own vanity or ambition? For one thing, if it's God's will it won't contradict what you know that Scripture says. For another, if you think it's God's will it's probable that at least some of God's people will agree with you.

Peter, you recall, was fine as long as he kept his eyes on Jesus. When he started seeing the risks, started dwelling on how scary what he was doing was, that's when he started to sink. That's the way to take a risk, then: keep your eyes on Jesus. Trust him, and know that he'll extend a hand to pull you up. If Jesus calls us to a risk, after all, he'll be there to rescue us if we get in trouble.

Follow the Lord when he calls you to take a risk, and you'll have a great story to tell.

Sure, it seems safer to stay in the boat. But when the Lord calls, you have ride the bull.