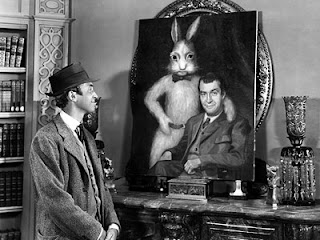 In the film Harvey, Jimmy Stewart's eccentric character Elwood P. Dowd is best friends with the title character – a six-foot, three-inch tall white rabbit that few people but him believe is real. While the film drops hints throughout, most people who “meet” Harvey assume that Elwood is alcoholic, insane, or both.

The plot of the movie has to do with Elwood's family attempting to commit him to a mental institution because they can't live with his “delusions” about Harvey any longer. But throughout all of his sister's and niece's attempts to commit him, Elwood remains kind, pleasant, and unperturbed - “Every day's a beautiful day” is one of his first lines in the film. In contrast to most of the other characters, he seems truly and genuinely happy. Despite his “delusion” he is, ironically, the most admirable and enviable character in the film.

And the reason for that is obvious: Jimmy has a center and a purpose to his life. He explains it in an alley outside a bar, where he tells two workers from the mental institution about the way he and Harvey spend their days:

“Oh, Harvey and I sit in the bars and - have a drink or two - play the juke box. And soon the faces of all the other people - they turn toward mine - and they smile. And they're saying, 'We don't know your name, mister, but you're a very nice fellow.' Harvey and I – warm ourselves in all these golden moments. Uh - we've entered as strangers -- soon we have friends . And they come over and they - they sit with us, and they drink with us, and they talk to us. And they tell about the big terrible things they've done – and the big wonderful things they'll do. Their hopes and their regrets, their loves and their hates. All very large, because nobody ever brings anything small into a bar.
And then - I introduce them to Harvey. And he's bigger and grander than anything they offer me. And - and when they leave, they leave impressed.”

Something similar seems to have happened to a woman in the town of Sychar a couple of millennia ago. It was an ordinary place – a literal “local watering hole” – the town well. Had it been today, she might very well have been coming into a pub for a quick lunchtime drink.

She had probably been to that well at least once every day, but today there was a stranger sitting there. He asked her for a drink, and a conversation ensued about “living water” that satisfies forever, and that even comes pouring out of the person who drinks it like a spring of life. She finds that he knows her, knows her problems and failings, knows that she's not loved or valued by the people closest to her. And by the time the conversation ends, she knows him – she knows who he is, and that he's bigger and grander than all her hopes and regrets, all her loves and hates.

And when she leaves him, she's not just impressed. She talks about him to anyone who will listen, and a remarkable thing happens:

Many of the Samaritans from that town believed in him because of the woman’s testimony, “He told me everything I ever did.” So when the Samaritans came to him, they urged him to stay with them, and he stayed two days. And because of his words many more became believers.
They said to the woman, “We no longer believe just because of what you said; now we have heard for ourselves, and we know that this man really is the Savior of the world.” (John 4:39-42)

Just as Jesus promised, once she knew him, a spring of that living water gushed out of her and inundated her town.

It strikes me that, in the film, if people didn't care to be with Elwood, or if he didn't have time for them, then there's a good chance they would have missed meeting Harvey. That's just the way Harvey chose to do things. It's the way Jesus often does them, too. Usually, people seem to meet Jesus when they meet someone who knows him. And they find that this person listens, and honestly cares, and they enjoy being with him or her. And that's when they meet the other person who's been there at the table all along. Jesus. And that's when things change.

If I'm honest, I don't think I've ever changed anyone with my wit or intelligence or piety or Bible knowledge. Every time I've tried that, in fact, it's ended up a disaster. Truthfully, I've given up changing people. If I can be like Elwood P. Dowd – a “nice fellow” who takes the time to be with people and hear them and introduce them to the Savior who's bigger and grander than either of us – well, I think my life will have been well spent.

Late in the film Dr. Chumley, who's in charge of the sanitarium to which Elwood is to be committed, meets with Elwood alone in his office. He's had an afternoon of his own with Harvey, and it's changed him. He says:

“Mr. Dowd, what kind of a man are you? Where do you come from...And where on the face of this tired old earth did you find a thing like - like him?
Yes - it's true - the things you told me tonight. I know it now.”

Sometimes I wonder, as we in the church try to force people to behave in a certain way, to change, to be more like – God forbid – us; I wonder if we believe it's true. That Jesus is real, and alive, and that he's bigger and grander than all the things we carry around with us. Living water only comes flowing out of us after we've gotten to know Jesus ourselves. Until we believe in him, in his power, as completely and winsomely as Elwood believed in Harvey, our efforts to introduce others to him will come up dry and empty.

So get to know him – not about him, get to know him. Spend some time with him. Take him with you when you're out. Make time for the people you meet along the way, and then somewhere along the line introduce them to Jesus.

I'm sure some interesting things will happen.
Posted by Patrick Odum at 11:35 PM