Putting Away Our Swords

Then the men stepped forward, seized Jesus and arrested him. With that, one of Jesus’ companions reached for his sword, drew it out and struck the servant of the high priest, cutting off his ear.
“Put your sword back in its place,” Jesus said to him, “for all who draw the sword will die by the sword." (Matthew 26:51-52) 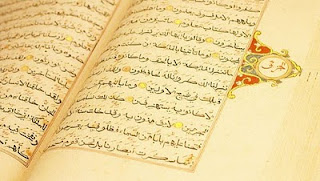 Last Sunday, two teenagers in Chicago went to the Muslim Community Center on Elston Avenue – in my neighborhood – for a prayer service. On their way in, they stumbled across a pile of charred paper on the sidewalk. A burned book. A burned Quran.

Let me reiterate: this wasn't in Florida. It was here in Chicago, in my neighborhood, in front of one of the city's oldest mosques. I've been to that mosque. I've been welcomed at their prayer services. I know people there. People who worship there come to the food pantry at Northwest for assistance. I've stood on the sidewalk – maybe on the spot where those kids found that charred Quran, and talked with Muslims about Jesus and Allah. The conversation has always been civil, and I've learned a lot. God has shown me a lot. And that burned Quran makes me angrier than anything that has happened in our neighborhood in a long time.

I can't help but wonder about the reasons for the anti-Islamic sentiment that seems to suddenly dominate public discourse in our country. Is it the anniversary of 9/11? Maybe, but why is it so evident on this anniversary, as opposed to others? Is it the on-again, off-again publicity stunt of some fringe pastor in Florida? Surely he just tapped into the mood, and didn't cause it. Is it the proposal to build a Muslim center near Ground Zero in Manhattan? Maybe, but that's a local issue for those folks to figure out.

More likely, the sentiment comes from frustration with the condition of the American economy – which seems to be the one thing Americans can be counted on to care deeply about. Someone has to be at fault, and since it certainly can't be blamed on the spending habits of Americans, it must be the immigrants' fault. Particularly the Muslims. Add to that a few political so-called leaders who want to milk distrust of Muslims for all its political value, and it's no wonder that a few already-marginal cases might decide to make a “statement” like the one that was made at the Muslim Community Center last Sunday morning.

I wonder, did the people who decided to burn that Quran go to church last Sunday? Did they sit secure in their pews, feeling that they had done God's will in opposing the false religion of Islam? I hope not. I hope that whoever it was is not so deluded as to think that an intentional insult to Muslims is the will of God, or the way of Christ.

And I hope that the offended Muslims don't judge all Christians by the work of a few who may claim to be. Any more than I judge all Muslims by the actions of a few radicals.

I hoped that the church had hashed all this out several hundred years ago, after the last of the Crusades. But maybe not. After the past few weeks, after Pastor What's-His-Name's abortive “Burn a Quran Day,” after someone in my city apparently took his idea seriously, I wonder. When so many Americans, some who call themselves Christians, behave so un-Christianly toward Muslims in so many places, I have to wonder.

So if you want to send me emails about supposed "true" events regarding Muslims in America – well, just don't. (The ones commonly forwarded today aren't factual, by the way.) If you want to vent your rage about Muslim women wearing hijabs or burqas, take it somewhere else. (Is it better for women to put themselves on display? Look around Chicago on a summer day, and you'd think so.) It is not Christian to be hateful toward Muslims – or any other religion. It just isn't. It's Christian to discuss your faith with someone who differs. It's Christian to “speak the truth in love.” It's even Christian to believe and testify that “there is no other name under heaven by which we must be saved” or “no one comes to the Father except through” Jesus. But it's never Christian to draw your sword and bare your teeth – metaphorically or otherwise.

To judge all Muslims by the actions of groups like al-Qaeda is comparable to judging all Christians by the actions of the Ku Klux Klan. Jesus warned that when we draw our swords – even to defend him – we've already lost. We've already failed to follow him in the way of the cross – the way of redemptive love that overcomes sin and evil and death, not by resisting or fighting, but by sacrificing self.

I believe Muslims need Jesus. I don't believe they will ever come to know him by his followers setting fire to the pages of the Quran, or defacing community centers, or railing in paranoid campaign speeches about their intentions and motives. It will succeed only in hardening them to the gospel. What might make a difference is if Christians approach Muslims with respect and the love of Christ. If we stand with them in the positive things that they do in our neighborhoods, and share their burdens as our own.

If we put away our swords, treat Muslims as neighbors, and do what Jesus said we should do. Love them as we love ourselves.

Last week, the Massachusetts Bible Society made an interesting announcement that seemed to kind of stay under the media radar. Too bad, because it was actually encouraging. They announced that for every Quran that was burned, they intended to donate two to mosques and community centers around the country.

But we don't have to do either. We can show love our Muslim neighbors without compromising our faith, and we can witness to the power of the gospel without forgetting that its power is love and sacrifice. So maybe we start with befriending Muslims in our neighborhoods and offices. (I was going to include schools, but have you ever noticed how kids seem to not have much trouble with that?) Maybe we start with small gestures: an invitation to coffee, a conversation at the water cooler, condolences in the loss of a loved one. Maybe we can help Muslim families who are new to our communities find schools, jobs, and so forth. Small things can go a long way.

A burned Quran can speak volumes. But so can a small act of kindness.

It's past time that we put away our swords so our Muslim neighbors can see the cross.

Unless otherwise indicated, all Scripture quotations are taken from The Holy Bible, Today’s New International Version TNIV (r), Copyright (c) 2005 by International Bible Society. All rights reserved.
Posted by Patrick Odum at 9:34 AM