I urge, then, first of all, that petitions, prayers, intercession and thanksgiving be made for all people— for kings and all those in authority, that we may live peaceful and quiet lives in all godliness and holiness. This is good, and pleases God our Savior, who wants all people to be saved and to come to a knowledge of the truth. For there is one God and one mediator between God and mankind, the man Christ Jesus, who gave himself as a ransom for all people.
-1 Timothy 2:1-6 (NIV) 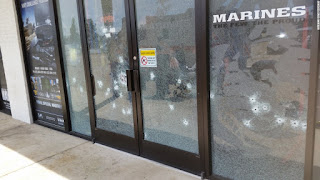 As I write this on Friday, Muslims around the world are celebrating Eid al-Fitr, the traditional end of the holy month of Ramadan. Everywhere but in Chattanooga, Tennessee.
On Thursday morning, a few hours before the start of Eid at sunset, a young man named Mohammed Youssuf Abdulazeez opened fire on a recruiting office and a Naval Reserve Center in Chattanooga. Marines Thomas Sullivan, Carson Holmquist, David Wyatt, and Skip Wells were killed. Three others were wounded, including a police officer. Abdulazeez also died, apparently in a gunfight with police. The possibility of domestic terrorism is being investigated.
This, of course, isn’t the first time an attack like this has happened in our country. It’s nowhere near the most deadly. It isn’t even all that surprising anymore, honestly. But this attack has captured my attention in a way others haven’t. I grew up in Chattanooga.
In fact, I grew up in the same suburb, Hixson, as Abdulazeez. My mother and father still live there. I had friends who lived in the same neighborhood, Colonial Shores, where the shooter lived and his family still live. I took classes at the same university he graduated from. He went to the same high school my father attended. When I read neighbors’ remembrances of him playing whiffle ball in the street of his subdivision, or driving too fast past their houses, I think of my own childhood.
I was thankful to read a New York Times article from yesterday quoting Dr. Azhar S. Sheikh, a founding member of the board of the Islamic Society of Greater Chattanooga, the mosque where Abdulazeez and his family worshipped. Dr. Sheikh said that the Center had cancelled its Eid celebration “out of respect and remembrance for our fallen Marines.” (emphasis mine) Dr. Sheikh went on to emphasize that violent interpretations of jihad were not preached at the mosque, and that he was horrified by radicals use of the Internet to recruit young Muslims. “We certainly do not want to be part of that demented ideology. That is not the message we preach here.”
There is too little impulse in our world for human beings to identify with one another, as Dr. Sheikh did when he called those murdered Marines our fallen Marines. It would be easy, on the basis of religious identity, or shared experience, or whatever, for Dr. Sheikh to identify more closely with the young Muslim, Mr. Abdulazeez. Instead, he took pains to identify with those victims of Mr. Abdulazeez’s feelings of anger or betrayal, or political ideology, or whatever it was that he would say motivated him to fire uncounted rounds of ammunition at living, breathing human beings. What Dr. Sheikh remembered, Mohammed Youssuf Abdulazeez forgot.
The politics of identity has turned our world into a roiling cauldron of special-interest groups, religious radicals, political action committees, and so on. We’re a fragmented, broken, disjointed mass of people that tweet or post or debate or pull triggers over every slight or difference of opinion, real or imagined, large or small. It’s Us versus Them, “Us” being those most like me, as long as they stay more or less like me, “Them” being everyone else. It’s made our politics ever more antagonistic, pitted West against East, Islam against America, white against black, immigrant against natural born, gay against straight, and even the church against itself. We forget, again and again, that on the other side of our differences, on the barbs of our words, and on the business ends of our guns, are other human beings. Sure, they’re different from us in some ways. But they’re fundamentally the same. They want to live free, and they want security for themselves and their families, and they love their children.
Something happened, apparently, to Mohammed Youssuf Abdulazeez. Despite that, if I was 20 years younger or he was 20 years older we could have been friends. I can’t kid myself into thinking he was all that different from me. And that’s good, because if I do forget it I run the risk of making the same mistake he made.
There will be those who use this shooting as they use everything else: to benefit themselves, consolidate their own power, carry out their own agendas. They will do this by trying to make “Us” think “We” aren’t safe from “Them.” And, no seeking to find common ground with another person is rarely safe. Focus on what’s different, and you can hate from a distance. But getting close enough to see how another person is more like you than you thought is hard. It gets you caught up in them, and they in you, like those old Reese’s Peanut Butter Cup commercials where the chocolate and peanut butter get mixed up. No, it’s not safe.
But it’s what we have to do, because it’s what God did. God, in Christ, chose to end his estrangement from human beings and seek out a relationship. Christ gave himself as a ransom for all people. He wants all people to be saved. Not people like me. Not people from a certain part of the world, or who speak a certain language, or have particular political leanings. All people.
And so, since that was God’s initiative, those of us who have put our faith in Jesus have to do the same. We have to pray and give thanks and make intercession for all people. We have to do good to all people, as we have the chance. And those who consider their differences with us an excuse to hate us, insult us, even attack us? As Jesus did, we meet those attacks, those insults, that hate, with love and sacrifice.
People who are different from us don’t lose their humanity because of those differences. Mohammed Youssuf Abdulazeez forgot that, or someone convinced him otherwise. May we, as people who know the God who loves all people, never forget that. May we love all people with the reckless love of Jesus Christ.


And may next year’s Eid be a happier day for all people in Chattanooga, Tennessee.
Posted by Patrick Odum at 4:16 PM