Not that I have already obtained all this, or have already arrived at my goal,  but I press on to take hold  of that for which Christ Jesus took hold of me. Brothers and sisters, I do not consider myself yet to have taken hold of it. But one thing I do: Forgetting what is behind  and straining toward what is ahead, I press on  toward the goal to win the prize  for which God has called  me heavenward in Christ Jesus.
-Philippians 3:12-14 (NIV) 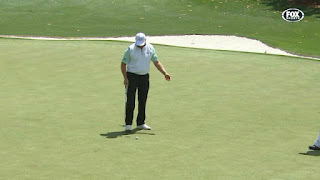 Ernie Els is a pretty good golfer.
I say that because of what I’m about to say about him. Honestly, he’s no slouch. He has 19 career wins on the PGA Tour. He has 28 wins on the European Tour (good for seventh all-time). He’s won the US Open twice, the British Open twice, finished second at the Masters twice, and third at the PGA Championship twice. If those stats don’t mean much to you, then just take it from me: There are very few golfers in the world who have accomplished anything like what Ernie Els has accomplished.
Ernie Els is a very good golfer. And that’s what makes what happened to him on his first hole of the Masters this week so shocking. On the par-4 first at Augusta National, Els shot a 9. A 9. Five over par.
You’d think maybe he hit his drive wide, or went into some water, or visited a deep bunker. You’d be wrong. Els hit a good drive. His second shot wasn’t great, but he only left the ball just short of the green. With his third shot, he chipped to within 3 feet of the hole. He was putting for an easy par. And that’s when the wheels came off.
A three-foot putt — well, even I can make one of those. Most of the time, even. Els missed. And then again. And then again. He missed 5 times, in fact. A professional golfer who has played the game at a championship level for more than two decades, and he six-putted from three feet. For all of Els’ professional accomplishments, he now owns a record he doesn’t want: a 9 is the highest score ever carded on Augusta National number one at The Masters.
"I don't know how I stayed out there," he said later.
I think I know how. I mean, I haven’t played professional sports, but I’ve been acquainted with a fair number of people who “stayed out there” after devastating failures. Professional failures, lost marriages, financial setbacks, broken relationships, failures of character: sometimes there’s no way to downplay or sidestep your mistakes. They’re public, they’re undeniable, and there is no doubt who is to blame. They rest heavy on you, and everyone who knows you see them writ large. If you’ve been there, or loved someone who was there, you know what I mean.
None of us, like Paul said, have arrived yet. None of us have “tak[en] hold of that for which Christ Jesus took hold of [us].” We’re heading for something, we know that, but we’re not there yet. And there are times when, all of us, we look like nothing short of spectacular failures. And you can let those gigantic failures define you, sink you, destroy you. Or you can stay out there — keep swinging, keep putting, weather the storm, finish the course.
And, to do that, you’re going to have to have a selective memory.
Paul says that he forgot what was in his past. He says he put his failures out of his mind. And, you know, Paul had some pretty significant failures in his past. He had made the lives of believers miserable, in fact, so much so that when he met Jesus and became a Christian, a lot of other believers didn’t trust him. Which goes to show that there will be people in your world who’ll be slow to let you forget your failures. And sometimes that’s understandable, and even appropriate. Sometimes our failures hurt people, and they need time to heal. But it doesn’t mean you have to define yourself by them.
Paul was capable of remembering his failures well when it suited his purpose. When he said he forgot what was behind, he didn’t mean literally, of course. What he meant is that he no longer let those failures define his identity. His sins were real, but they were about who he had been. Jesus had taken hold of him, and now he had a new identity. And so he pressed on toward the future the Lord had given him.
That’s what we need to understand when our failures threaten to get the better of us: Jesus has taken hold of us and given us a new future. So he invites us to forget what’s behind and sprint with him toward what’s ahead. It’s not about making up for our failures, balancing some cosmic scales with our good deeds until we hit some sort of equilibrium. The new future we have is in Christ, and we have it because he sacrificed himself to in some way take away the power of our failures. Though it sounds too good to be true, it’s as real as his cross and his empty tomb. And to live with the weight of our failures is foolish, and even worse it’s faithless.
A few years after he wrote about forgetting, pressing on, and straining toward the promises Jesus had given him, near the end of his life, Paul wrote, “I have fought the good fight, I have finished the race, I have kept the faith. Now there is in store for me the crown of righteousness, which the Lord, the righteous Judge, will award to me on that day.” That’s our hope, too, and it’s all the reason we need to forget the epic failures that we all look back on with shame. Put them out of your mind, trusting that Christ has taken away their power. Strain toward what’s ahead, lean into the future that God has given you in Jesus. Press on with your eyes set firmly on the goal at the end of the race.
That’s how you stay out there. That’s how a person who believes in Jesus copes when they six-putt.


Keep the faith. Ernie Els won’t win The Masters this year. But because of Jesus, our victory is sure.