The State Book of Tennessee

In the time of those kings, the God of heaven will set up a kingdom that will never be destroyed, nor will it be left to another people. It will crush all those kingdoms and bring them to an end, but it will itself endure forever.
-Daniel 2:44 (NIV) 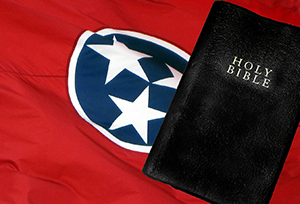 I grew  up in Tennessee, where the state flower is the iris, the state tree is the tulip poplar, and the state bird is the mockingbird. (I knew those from memory.) The good people of Tennessee also have a state insect (lightning bug), a state reptile (the eastern box turtle), a state wild animal (the raccoon), and two state fish (the largemouth bass and the channel cat). There are, amazingly, nine state songs. (Yes, Tennessee Waltz and  Rocky Top are two of them.) There’s even a state rifle, as of two months ago — the Barrett M82/M107. (a 50-cal. semiautomatic just like Davey Crockett used to use, I guess)
Tennessee does not, however, have a state book, as the governor, Bill Haslam, just killed a bill that would have given the Bible that designation. His rationale: “this bill trivializes the Bible, which I believe is a sacred text.” He later wrote, “Our founders recognized that when the church and state were combined, it was the church that suffered in the long run.”
A century ago another Tennesseean, David Lipscomb, came to a similar conclusion during the Civil War:
Finally the years of sectional strife, war, bloodshed, destruction and desolation swept over our land, and the spectacle was presented, of disciples of the Prince of Peace, with murderous weapons seeking the lives of their fellowmen. Brethren for whom Christ died…were found imbruing their hands in the blood of their own brethren in Christ, making their sisters widows and their sisters' children orphans. It took but little thought to see that this course is abhorrent to the principles of the religion of the Savior, who died that even his enemies might live. He had plainly declared that his children could not fight with carnal weapons even for the establishment of his own Kingdom. Much less could they slay and destroy one another in the contentions and strivings of the kingdoms of this world. It took but little thought to see that Christians cannot fight, cannot slay one another or their fellowmen, at the behest of any earthly ruler, or to establish or maintain any human government. But if he cannot fight himself, can he vote to make another fight?
Haslam, as a political leader who doesn’t want the Bible trivialized, and Lipscomb, as a church leader who doesn’t want Christians to lose their identity for the sake of the state, are singing the same tune.
It’s nothing new for political leaders to try to use the Bible in their platforms. Co-opt the Bible, and you might gain a lot of voters for whom the Bible has great meaning. Lawmakers in Tennessee explained that they intended their bill to “recognize the Bible's role as a record of family history” and honor “the importance of Bible publishers in Nashville.” But once the Bible gets too tightly tangled in the machinery of civil government, it’s hard to untangle it. It can be (and has been) pointed like a gun at whatever elements of citizenry are deemed to be enemies. It can be (and has been) used to justify horrendous abuses and injustices. When the state becomes too identified with Scripture, it tends to go deaf to the ways in which the Scripture speaks in judgment of its sins.
And when the church becomes too cozy with the state, then the church has become the oppressors.  That’s just history. When we get too comfortable with the trappings of civil power, we forget that we’re supposed to identify with the One who came with love and grace, especially for the poor and marginalized. We give up our identity as citizens of the Kingdom of God in order to hold and exercise civil power in defense of our narrow interests and agendas.
If you could take a survey of deputies turning fire hoses on demonstrating blacks in the 60’s, or Gestapo rounding up Jews in Nazi Germany, or Calvinists persecuting Anabaptists in Geneva, you’d find they have one thing in common. They would say they were Christians.
I see these things happening in Tennessee, though, from a distance, for the simple reason that for the last couple of decades I’ve been a citizen of Illinois. I’m interested, to a degree. I have family there, and I visit often, and still feel some sense of connection to the Volunteer State. But that’s not who I am now.
And that, I think, is how Christians ought to view the noise and bustle of civil government, whether local, state, national, or international. We have connections to it. It affects the way we live day-to-day. But we should see it from a distance, because that’s not who we are. We’re not, primarily, citizens of our own towns or states or countries. We belong to the kingdom of heaven, and we’re still looking for the day when  Jesus comes and his kingdom comes in power and his will is done, finally and completely, on earth as it is in heaven. That’s the hope we have, and the reason we live.
Daniel looked forward to the day when God’s rule would topple every civil government on earth. Jesus preached that he was bringing that same kingdom was near. Paul wrote that those who trust in Jesus are citizens of that kingdom, and the hope we wait for isn’t anything that a civil government can provide.
Maybe believers shouldn't vote, or serve in civil government: maybe they should. But never with the intent of folding up the Kingdom of God into the boundaries and self-concern of a particular country, or political party, or interest group. No human legislature ever adequately represented the will of God. No party platform ever satisfactorily contained the gospel.


Remember that in this election season.