Christmas with the Gospels: Matthew

As we wait for Christmas, I thought I’d take four weeks here to take a wide-angle look at each of the Gospels, the four stories of Jesus’ life from the New Testament. This week we’ll get into Matthew. (You can read my take on Mark here.) 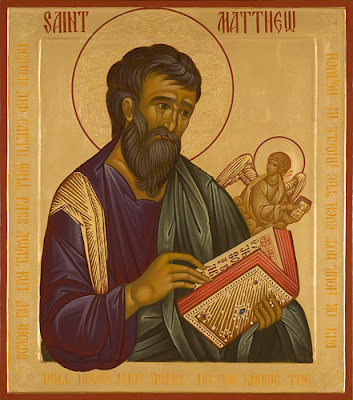 Christians believe that the Gospels come from the Holy Spirit, but it’s also clear that the Gospel writers weren’t simply stenographers taking dictation. (Luke 1:1-4) The question is how human writer and Holy Spirit cooperated. While Matthew is the first Gospel in our Bibles, most scholars these days are convinced that Mark was the earliest Gospel. None of the evidence for this makes the priority of Mark a slam dunk, but taken together it does seem to lean in that direction. Most everyone agrees, at least, that there is clearly some interdependence between Matthew, Mark, and Luke, or at least that they share a common source. We’ll get into that a little more next week when we take a look at Luke.

But this week, we’re looking at Matthew.

While Mark focuses largely on what Jesus did, Matthew focuses on what he said. He organizes his Gospel into five blocks of Jesus’ teaching. The ends of these are marked by the phrase, “When Jesus finished saying these things….” or something similar (11:1, 13:53, 19:1, 26:1). The first discourse (usually called the Sermon on the Mount), is about life in the Kingdom of Heaven (Matthew’s term for what is elsewhere called the Kingdom of God). The second discourse (chapter 10), is addressed to the disciples as they are sent out to heal and preach. They are told not to be afraid when they’re opposed because they will be given words to answer their opponents. The third (chapter 13), consists of parables that describe the Kingdom of Heaven. The fourth (chapter 18), anticipates the existence of a future community of disciples living by Kingdom values that Jesus calls “the church,” and that humility and service are the highest values in that community. The fifth (chapters 23-25) warns the disciples to be vigilant in light of the coming judgment.

Matthew surrounds these blocks of teaching with narratives showing Jesus’ ministry and the various reactions to it. Over and over, Jesus challenges those who resist his message of the Kingdom (especially the religious leaders) and encourages the “weary and burdened” to learn from him. He heals on the Sabbath and casts out a demon as evidence that the kingdom of God has come, bringing him into conflict with the religious leaders and even his own family. The feeding stories, the stilling of the storm, Peter’s confession, and the Transfiguration offer testimony as to his identity. The last third of the Gospel is devoted to the last week of his life as he enters Jerusalem as the coming king, engages in a final conflict with the religious and civil leaders, accepts God’s will in Gethsemane, and after his death and resurrection meets with his disciples to commission them to carry on his work in the world.

All of the narrative and teaching is intended by Matthew to show that Jesus “fulfills” (a favorite word of Matthew’s) the long-expected Old Testament roles of “Son of God,” “Son of David,” and “Son of Man.” He is first called “Son of God” by Satan, who asks Jesus to prove his identity by miraculous means (making stones into bread or throwing himself down from the temple to test Psalm 91’s promise to the one who finds refuge in God). He is recognized as the Son of God by demons (8:29), and finally acknowledged as Son of God twice by his disciples (14:33, 16:16). After this, he is only called Son of God in a mocking way by those who are trying him (26:63) and by the passers-by (27:40) and religious leaders (27:43) at the cross. Finally, the Gospel climaxes with the Romans who are guarding his cross confessing him as Son of God after the momentous events at his death. (27:54) The identification of Jesus as Son of God at his death casts the title (from Psalm 2) in a new light. In the Psalm, God calls the king he has enthroned his Son, to whom he will “give the nations as an inheritance.” In Matthew, he is “enthroned” at his crucifixion. As in the Psalm, to reject the Son will lead to destruction, but those who take refuge in him will be blessed.

Matthew’s Gospel begins with an affirmation that Jesus is the Son of David, and “proves” it through the genealogy (1:1-17). Generations are left out to create three blocks of 14 names each (maybe because the numeric value of the Hebrew letters in David’s name is 14). Tamar, Rahab, and Ruth are included (though women were not mentioned in Israelite genealogies) while the traditional mothers of Israel like Sarah, Rebecca, and Rachel are left out. The genealogy locates Jesus within the larger framework of God’s covenant history with Israel, but it also has the effect of making Jesus the culmination of that work. It reads as though Israel is still in Exile (fourteen generations from David to the Exile, and fourteen from the Exile to the Messiah).

The title “Son of David” usually occurs in Matthew in connection to miracles. Sufferers cry out to Jesus for healing (“have mercy”) using the title (9:27, 15:22, 20:30). After Jesus casts out a demon that has made a man blind and mute (his ability to see and hear afterward serves as evidence of what Jesus has done), “all the people” speculate that he could be the Son of David (12:23), demonstrating that the title is a Messianic one and that Jesus’ miracles had awakened hopes of God intervening in his people’s long suffering. Another crowd celebrates him as Son of David when he comes into Jerusalem during the last week of his life (an event that Matthew says “fulfills” Zechariah’s characterization of the King coming to Jerusalem). Once again, it is Jesus’ opponents who are the last to acknowledge him as Son of David — unintentionally, of course (22:42).

While others use the other two titles for Jesus, in Matthew his self-characterization is “Son of Man.” In Daniel 7, it is “one like a Son of Man” who receives the glory of the beastly, earthly kingdoms after they are toppled and delivers it to “the saints of the Most High.” Jesus applies this title to himself around thirty times in Matthew, with the frequency increasing in the latter part of the Gospel. Sometimes the title emphasizes his humility and suffering (8:20, 17:12, 22), but most of the time it emphasizes his role as the one who brings salvation (13:37, 20:28) and judgment (13:41). Related to this is the idea that, though he will be crucified (20:18, 26:2) as a “ransom,” the Son of Man will “come” with reward and recompense (16:27) after he is raised from the dead (17:9). He will “come in his Father’s glory” (16:27) and “with the clouds of heaven” (24:30, 26:64). Again, the last time the title is used, Jesus is in front of his opponents and uses the words of Daniel 7 to promise that they will see him coming again to topple their kingdom and establish the unchallenged reign of God.

I’ve left out, of course, Matthew’s prologue; the events leading up to and including the birth of Jesus. Mary, who is “found to be pregnant through the Holy Sprit,” fits well with the questionable circumstances and ancestry of the three women just mentioned in the family history. Prophecy is fulfilled as Joseph obeys God. Matthew knits the story from there together with five Old Testament texts that he says are “fulfilled” in Jesus. Pagan astrologers see the signs of Jesus’ birth in the heavens while Israel’s king knows nothing of it and plots to have him murdered, which sets up the conflict with the religious and civil authorities that will mark Jesus’ life and end in his death. The family flees to Egypt, but even in that Matthew sees the fulfillment of prophecy.

May we as well always keep our eyes to the heavens, expecting Jesus to come and fulfill God’s promises.