"My Soul Glorifies the Lord"

He has performed mighty deeds with his arm;

he has scattered those who are proud in their inmost thoughts.

He has brought down rulers from their thrones

but has lifted up the humble.

He has filled the hungry with good things

but has sent the rich away empty. 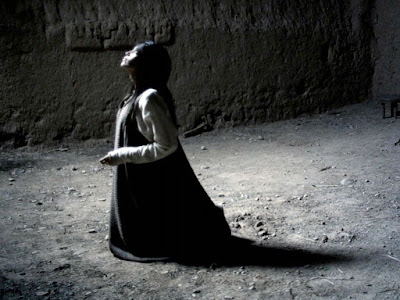 As I write this, Christmas Eve 2020, people are making tough decisions (our family included) to not travel this Holiday season. They’re choosing to be together on Zoom, FaceTime, Skype or whatever, if they can do that. (One thing this pandemic has brought to the surface is the tech divide between older and younger generations, or between the poor and the more affluent.) They’re suspending long-standing family traditions.

While some seem to be giving more gifts to friends and family in the absence of being together, others are forced to scale back because of lost jobs or other financial uncertainty.

Some, of course, are marking the first Christmas since a parent, spouse, child, or good friend has died.

None of that, of course, is unique to Christmas 2020. The scale is unique, though; pretty much every Holiday celebration in the world is touched by this pandemic, to one degree or another.

Also at Christmas 2020, our national leaders struggle to address all of this in any meaningful way. While they argue and delay and play power games, we wait for some sign that they recognize the pain that many people are living with and feel their responsibility to do something to help make their burdens just a little lighter.

All while a President struggles pathetically to hold on to power at any cost.

And if you’ve read the story of Jesus’ birth in the Gospel of Luke, none of this should surprise you.
Jesus was born into a world where the poor were made poorer and rich richer by those in power. In his world, the powerful schemed to hold on to their power, whatever their scheming might cost those they intended to rule. In the time and place where he was born and lived his life, in which his parents and countrymen lived, most people lived day-to-day, praying for their not to be a crisis that would disrupt the delicate economic balance in which they existed and leave them starving.

Please look at a part of Luke’s nativity story that we sometimes overlook. It’s Mary’s song, often known as The Magnificat (which I would absolutely name my cat if I had one) after its first word in Latin. Mary’s had an eventful few days or weeks. She’s been visited by an angel. This angel has told her that she’s pregnant (without a guy’s involvement), that this son she’s going to have is the Davidic king that Israel has been awaiting for centuries, that his kingdom will never end, and, oh yes, that all of this will happen through the power of the Holy Spirit so that her son will be, in a way no one else has ever been, the Son of God. The angel also mentions her cousin, Elizabeth, who is also pregnant — which is also miraculous, since she was “said to be unable to conceive.” When Mary arrives to visit Elizabeth, the baby she’s carrying “leaps for joy,” and Elizabeth is filled with the Holy Spirit and prophesies that Mary is “blessed” for believing that “the Lord will fulfill his promises.” Out-of-the-ordinary things are happening. Angels are making announcements. Unexpected pregnancies are occurring. A new king has been born. A new kingdom is inaugurated.

So Mary’s song celebrates these things. She “glorifies the Lord.” She “rejoices.” Why? Because she hasn’t been well-served by the king in power. The kingdom she lives under hasn’t been particularly good or kind or benevolent to her neighbors. She’s lived all of her young life with the inherited hope that God would intervene in the lives of his people, break their chains of bondage to Rome, and restore their fortunes. And now, God “has been mindful of the humble state” in which she and people like her live. “All generations will call her blessed” because through her God is showing that those who fear him can expect to receive his mercy.

You know who doesn’t rejoice? Rome. The leaders of Israel who are allied with Rome. The religious leaders who use their piety as a front for greed, corruption, and addiction to power. Anyone who monetizes fear to get people to do what they want, or take what they want from them. Word of a new kingdom never pleases those who are currently reigning.

Mary sees what God is doing so clearly: in choosing this young girl from a nowhere town to bring his Savior into the world, he’s upending business as usual. He’s scattered those who are proud of themselves and their power and arrogant in their own strength and wealth. He’s bringing down rulers from their thrones — not just spiritual or metaphorical ones but real human rulers. His kingdom will outlast the high priest and the system he presides over, the Roman governor who pulls the strings, even Caesar and the Empire that rules the world. In place of those rulers, he’ll raise up people like Mary who have nothing and mean nothing in the world. He’ll see to it that the hungry have a place at his table while telling the wealthy to get lost.

The degree to which we spiritualize all this, make it into some kind of parable about Jesus overcoming evil or sin or the devil or something, probably depends directly on whether we mostly identify with the hungry or with the wealthy. Jesus can be nice to sing about, or read about, or hear about in church. But it’s tough to celebrate if we’re more invested in the failing kingdoms of the powerful and wealthy than we are in God’s kingdom and the one who opens its gates to us.

To celebrate Christmas, to glorify the Lord and rejoice in our Savior the way Mary does, we’ll need to get over the sentimentality of the season. Put Mary’s song on the lips of most anyone else, and you have a song about revolution, a prophecy that God is coming to stand everything we think our world is about on its head. Because it’s Mary, we smile serenely and tell people who are suffering from the selfishness of those in power in this world that it will all be better one day in heaven, and that we have it better than anywhere else in the world, and that anyway if you’d just get your life together like we have ours together you wouldn’t be in this mess.

Jesus came, though, because the way the world is IS the mess. The only way to fix it is to live another way, by the laws of a revolutionary alternative kingdom that came smashing into our world not in an army or a campaign but in a newborn baby sent from God. The only way to see this world transformed before Jesus comes is to see it transformed in the way we treat the people around us. Do we identify with those in humble circumstances? Or do we find our identity in the powerful, wealthy, and influential? If we’re identifying with them, we’re on the wrong side. Their time is passing.

Jesus teaches us a new way to live, the way of love over power, sacrifice over arrogance, peace over violence, generosity over selfishness. He offers us grace and forgiveness, and fills us with his Spirit so that we can live in grace and forgiveness toward others. Let’s welcome his coming with rejoicing. Let’s glorify the Lord with our words and our obedience, like that young girl in Nazareth all those years ago.