Woe to those who go down to Egypt for help,

who rely on horses,

who trust in the multitude of their chariots

and in the great strength of their horsemen,

but do not look to the Holy One of Israel,

or seek help from the LORD. 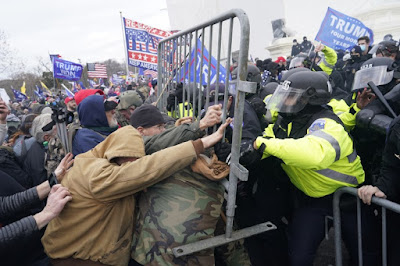 This is why Christians shouldn’t get too caught up in political parties. This is why we shouldn’t believe the easy words of demagogues who appeal to our fear or our pride or our selfishness to gain and hold on to power. This is why we ought to be careful about believing that this candidate will save us, or that this next candidate will save us from the first one. This is why we ought to look for an outstretched hand whenever someone arises from the political landscape to claim that he or she will protect our “way of life” and vanquish our enemies. This is why valuing military power, economic strength, and a closed society over justice and righteousness never works.

I’m not trying to say “I told you so.” Far from it. I’m reminding myself of it. Those who may have seen it coming this time might just as easily be a little too cozy with the powers-that-be the next time around. The temptation to find security in the halls of government and those who inhabit them is always with us.

Always has been, I guess. Millennia ago, the prophet Isaiah told God’s people, God’s nation, not to trust in a political alliance with Egypt to keep themselves secure and prosperous. It was so tempting, with the armies of Babylon on their borders. Egypt had their horses and chariots and warriors, enough army to go toe-to-toe with Babylon. By comparison, Israel wasn’t very imposing at all. Any general worth their swagger stick would have recognized a military strategy in which Israel’s army went into battle alone against Babylon was suicidal. Whatever deal they had to make to get Egypt’s ordinance on their side was worth it.

The problem being that God drew a line: to go to Egypt for help, to make a deal that entangles them in a covenant with another nation, is to fail to trust in God. It’s to give up on the first covenant that they had made with him. Alliances with foreign kings bring worship of foreign gods. They bring loss of identity as God’s people, defined by their covenant with God. They require unfair taxes that place hardship on the nation.

It went way back. Gideon put the Midianites to flight with 300 men armed with trumpets and torches. In the Exodus, Israel had taken the walled city of Jericho without firing a shot, instead obeying God and waiting for him to bring down the walls. Their champion David defeated the Philistine champion, Goliath, with no armor and only a shepherd’s sling for a weapon. The history was there, the stories of God’s deliverance,  but instead of trusting in God Israel was being drawn into a political alliance that would in the end provide them with nothing.

Are we any better at history? Maybe not. Over and over, the church has allied itself with political powers. Even more often, perhaps, Christians have made the mistake of thinking that the people whose names they check in a voting booth and whose campaigns they donate to will save them from the things they fear and give them the security they crave. But there have always been a few reminding us that our hope is in God, not in political power or the politicians who promise it.

Let the events of this week in D.C. — events that our children and grandchildren and great-grandchildren will study in school and wonder just how in the blazes we let it happen —  let them remind us as Christians of the cost of clutching at political power. Today, believers who thought to one degree or another that a political alliance with the current administration was worth the price are left backpedaling, or deflecting, or excusing, or explaining, or apologizing. The church will be picking up the pieces of our witness to the gospel for years because some of us — not all of us, and not even all of us who voted for Trump — thought that just this once trusting in his chariots and horses might be a little more realistic than trusting in God.

And, of course, in a year or two or four or whatever, some of us may be regretting just as much trusting in Biden to deliver us. Illicit alliances aren’t just red and they aren’t just blue. They’ll lead us to turn on the neighbors we’re supposed to be loving. They’ll lead us to make compromises that prop up the one in whom we’ve placed our faith. They’ll lead us to neglect the weightier matters of following Jesus for the trivia of maintaining loyalty to the party or candidate.

They’ll lead us, in short, to give up our citizenship in the Kingdom of God in favor of the kingdoms of this world.

But how? How do we completely avoid political engagement?

Well, I didn’t say that you should. But how about this: Why not try to keep your political engagement more hands-on? Come out from behind a keyboard and off social media and engage locally. Be part of positive, constructive work in the community in which you live. Get vacant lots turned into playgrounds. Run for a local school council to make a real difference in the educational experiences of children who you know. Join a citizens’ police oversight board. Donate to or volunteer at a food pantry. Help get a community garden started. Clean up trash, help repair an elderly neighbor’s house, advocate for affordable housing. There are a thousand things you can do to serve.

And that’s the key word here: service. Jesus said that those who want to be great should serve — not claw for power, but serve someone else. For a believer, politics should not be about what I can get for myself and those I love. It should be how I can show love for my neighbor, whoever they are — how I can help them share some of the things that I enjoy. We’re most like Jesus when we’re serving those around us. We’re least like him when we’re jockeying for political power.

Politics as service keeps us focused on the central, twin, issues of living in our world: justice/righteousness. Jesus told us not to be anxious about having what we think we need — our own little kingdoms — and instead to seek first God’s kingdom and his righteousness. Our political parties aren't the equivalent of righteousness and justice, but they should be the means of them. If they aren't, what good are they? We have to know, don’t we, that much of our political involvement hasn’t been about those things. We need to repent of that and resolve to do better.

What we saw this week, and what we’ll be trying to explain for years to come — this is why.