Then Jesus told them this parable:

Suppose one of you has a hundred sheep and loses one of them. Doesn’t he leave the ninety-nine in the open country and go after the lost sheep until he finds it? And when he finds it, he joyfully puts it on his shoulders and goes home. Then he calls his friends and neighbors together and says, “Rejoice with me; I have found my lost sheep.” I tell you that in the same way there will be more rejoicing in heaven over one sinner who repents than over ninety-nine righteous persons who do not need to repent. 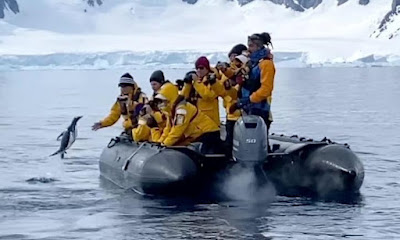 I saw a video a couple of weeks ago that’s one of my favorite things I’ve seen online. Maybe you saw it too; it’s a video taken by a tour group in a boat in Antarctica. When the video opens, they’re watching a pod of orcas — “killer whales” — hunting in the water off an ice shelf. The orcas peel off to chase some prey — a penguin — and everyone in the boat thinks they’re about to see a penguin get eaten. The penguin makes a good run for it; you see him skipping along at a pretty good clip through the water, breaking the surface over and over for breath as he tries to keep ahead of the orcas. You can hear someone in the boat saying, “Go, penguin!” But you know he can’t run forever. One time, in fact, it looks like he’s been caught, but then the camera picks him up heading off in another direction.

Unfortunately for him, the orcas see him too.

At that point, the penguin seems to come to the conclusion that he’s cooked and he needs a new plan, and he starts swimming close to another Zodiac boat full of tourists. With the orcas hot on his tail, the penguin attempts an all-or-nothing leap out of the water into the Zodiac.

And he hits the side and bounces off, back toward the orcas.

He has just enough time, though, to regather himself for one more leap. Again he pops out of the water, and again it looks like his leap is going to be just short.

But this time, someone in the boat reaches out a hand. The penguin kind of kicks off the hand and finds himself in the Zodiac, surrounded by people. For a little while, he stands there in the middle of the boat, staring at all these people staring at him and seemingly a little bewildered. But he also seems to appreciate the rest.

The orcas circle the boat for a little while. But, soon enough, they swim off to find other prey.

After enjoying his sanctuary for a little longer, Mr. Penguin hops up onto the edge of the Zodiac and, with a wave of his flipper, dives back into the water.

OK, I may have made up the wave.

It’s a cute video. But look around you. The people you work with are in danger of being eaten alive, swallowed whole, pulled under by what’s hunting them.

They’re being overwhelmed by an addiction that won’t let go.

They don’t know which bill to pay next, and have started to think it doesn’t matter.

They’re fighting chronic disease with subpar medical insurance, or none at all.

They’ve lost a job and have few prospects for a new one.

They don’t know if the relatively dry spot under the bridge where they’ve been sleeping will be available tonight.

When it’s time to cook dinner for their expectant family, the cabinets will be empty.

They’ve lost a spouse or partner and they feel like dying, and wonder if anyone will notice.

They don’t know where their son or daughter is tonight.

Or they know where he or she is, and it’s a cemetery.

These are people you know. You work with them. You pass them on the street. You go through their checkout line at the grocery store. You’ve patronized their business, or they’ve patronized yours. You’ve sat beside them in class. Or maybe in church. And you didn’t know, but they’re like that penguin, swimming desperately just to stay afloat and ahead of that thing with sharp teeth coming up on them hard from behind.

Jesus compared them to lost sheep, maybe because he hadn’t seen a penguin since creation. But the point remains. They’re helpless, they’re alone, and they’re no match for any of the things that want to kill them.

But some of the religious folks were complaining. “This guy welcomes sinners. He eats with them.”

And what they intended as an insult was the work of God, and it still is.

Years ago, when I first followed this pretty girl to Chicago, I didn’t have a job. I had a Bible degree, so I had that going for me. But she was here, so I decided to figure the rest out later. So I was unemployed, and one Sunday I went to church. That pretty girl introduced me to a guy who ran his own business. I told him I was looking for work, and asked if he had any advice.

Now, I wasn’t without resources. Everything worked out fine. But I still remember at that moment exactly how I felt. May I never tell anyone who comes to me, to my church, looking for help to keep looking.

When someone leaps into our rafts, let’s be for them a place to rest, to catch their breath, to feel safe. We can’t solve everyone’s problems. But we can show them what it’s like to be with people who care about them, who aren’t trying to eat them, and who are willing to help however we can.

Look for the people who need a place to be safe, and reach out a hand to help them into your boat.