And we know that in all things God works for the good of those who love him, who have been called according to his purpose. For those God foreknew he also predestined to be conformed to the image of his Son, that he might be the firstborn among many brothers and sisters. And those he predestined, he also called; those he called, he also justified; those he justified, he also glorified. 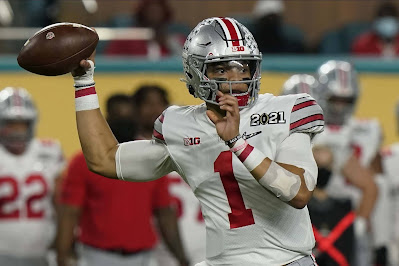 Just like that, people in Chicago are excited about Bears football again.

There hasn’t been that much to be excited about the last few years, ever since the Double-Doink that cost the Bears a playoff win in 2018. Since then, they’ve gone 16-16 — pretty much the definition of mediocrity. Bad enough that they aren’t competitive against the NFL’s best teams, good enough that they don’t get high draft picks that could help them win.

Last night, though, in the opening round of the NFL Draft, the Bears traded up to get a higher spot, the 11th pick. Meaning that, when they picked, there were potentially franchise-changing players still on the board. The Bears picked Justin Fields, a quarterback from Ohio State.

A quarterback. Arguably the single most important position in all of professional sports. Since 1978, when the NFL began playing a 16-game schedule, the Bears have had a quarterback throw for 4,000 yards in a season…never. Just as a comparison, 12 quarterbacks did that for other teams…last season. Most Bears fans would probably say that the best QB in Bears’ history was Sid Luckman, who last took a snap in 1950. So there’s some excitement in Chicago about drafting a guy who a lot of analysts said would have been the best quarterback available in most years.

Of course, the player still has to produce. The coaches still have to coach. The General Manager still has to surround him with good players. He has to stay healthy. A lot has to go right for Justin Fields to end up being the player that fans who are buying his jersey hope he’ll be. The Bears haven’t exactly proven themselves adept at developing good quarterback prospects. (Mitch Trubisky, anyone? Jay Cutler? Cade McNown?)

But, for now, there’s a lot of optimism, expectation, and hope.

As I said, that’s been rare in Chicago Bears football recently.

It’s rare seemingly across the rest of our country and the larger world, as well.

Everyone says we’re more divided as a nation than we’ve ever been. Doomsday “sky is falling” scenarios dominate the news cycles of the newsertainment TV networks and websites with which so many of us while away the hours. We’re over a year into a pandemic that has brought life for so many to a drastic slowdown, if not a skidding stop. We hear news of racist acts from seemingly every state in the Union, and we also hear from   those who inexplicably try to excuse the worst of it.

Covid is taking a terrible, unimaginable toll in India. Countries in Asian and Europe threaten each other with troop buildups and stealth attacks. Seems like everywhere you look, there’s another reason to be resigned, hopeless, and depressed.

That’s not altogether mistaken, either. Paul says it this way in Romans:

We know that the whole creation has been groaning as in the pains of childbirth right up to the present time. Not only so, but we ourselves, who have the firstfruits of the Spirit, groan inwardly… (Romans 8:22-23)

We “groan inwardly,” he says. All of creation groans. That explains a lot, really. The world God created is full of frustration. What Paul says in this section of Romans is that the frustration we feel as a part of a broken creation is universal. When we groan, it’s an echo of the whole creation around us that wants to be better, wants to be whole, wants to be redeemed, that’s waiting to be liberated from bondage to decay. Creation’s dying, Paul says, and so are we, and so it’s no wonder that it can be hard to get excited about our prospects.

Or it would be, if God hadn’t stepped in.

See, that’s Paul’s point when he says, “In all things God works for the good of those who love him.” Sometimes we take that as sort of a garden-variety, warm, fuzzy Bible verse that you stick up on your mirror as some sort of daily affirmation that it’s all, somehow, going to be OK. In reality, though, what Paul means has a much harder edge. He’s saying that God has broken this cycle of frustration in Jesus. The frustration is real, no doubt about that — frustration we feel about the injustice in our world, or the logjam of politics, or the misunderstanding of other people, or even our own sins — but the work of God in Jesus is just as real.

In Jesus, God says we’re his children, with a right to inherit what he wants to give us. We “groan” now because we’re still waiting for it, but one day our bodies will be redeemed, Paul says. He means that the time is coming when we won’t groan anymore, because the things that make us groan — sorrow, pain, anger, frustration, disappointment — will all be gone. Creation will be what it’s supposed to be. We’ll be what we were supposed to be.

Until then, we “wait eagerly,” says Paul. We have more to do than just groan in hopelessness, expecting nothing to change and just living out our days resigned to eventual destruction. We look forward to the day of redemption, when we’ll live in “the freedom and glory” that as God’s children we have a right to. All of creation waits for this day, Paul says, waits in “eager expectation” — expectation because there’s no doubt about it. The reality of this hope lies in the fact that God has given up Jesus for us. If he died for our sins and was raised from the dead — and the Christian hope is that he did and he was — then we have every reason to wait for the day of redemption with anticipation and eagerness.

God is working everything out for good for those who love him and are willing to live for the purposes he has for us. God knew us before we knew him. He has always been making us look more and more like Jesus. He has called us and made us righteous and has glorified us — listen to all those past tenses! In other words, by the work of Jesus he has already replaced our reasons for groaning with reasons for hope and expectation.

So let’s bring that hope and expectation to our world and to our lives and to the people in our lives. When creation groans around us, let’s answer those groans with words and actions of anticipation. We aren’t locked in a downward spiral, not if we can trust what God is doing and has already done through Jesus.