Broken and Poured Out

While he was in Bethany, reclining at the table in the home of Simon the Leper, a woman came with an alabaster jar of very expensive perfume, made of pure nard. She broke the jar and poured the perfume on his head. 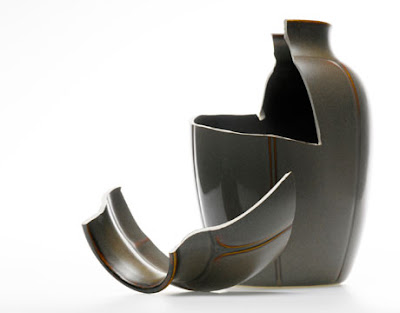 I heard someone tell a story once about locking her child in the back seat of her car. She had parked, gotten out of the car, closed the driver’s side door — and then realized her keys were lying on the front seat.

Well, she panicked a little. The kid was very young, still in a car seat, and she saw little hope that she’d be able to teach her how to unlock a car door through the closed window. Her mind started racing, her heart started pounding. Should she call the police? A locksmith? How long would it take? Would her child start crying? She started to feel a knot in her throat and tears started stinging her eyes. What should she do?

Then she saw the rock in a median in the parking lot. Just the right size to hold in her fist. She picked it up, thought about it, just for a moment, then swung the rock against the glass. It broke into a zillion pieces, as safety glass does. The kid immediately started wailing, but she could see that she hadn’t been injured and was only scared. Breathing a sigh of relief and a little prayer of thanksgiving, she reached through where the back driver’s side window of her car had once been to unlock the door — and discovered, of course, that the door wasn’t locked.

The front doors both were. The back, not so much. She’d smashed in her window for no reason at all.

But broken is broken. There’s no going back.

Don’t you love when you notice little things in the Bible that you never paid attention to before, but which can’t be unintentional? Here’s one of those, and I think you’ll see quickly enough what it has to do with a broken car window.

In Mark 14, Mark tells the story of Jesus in Bethany at Simon the Leper’s house. A woman enters the house and walks up to the table with a very expensive jar of perfume (bet you never paid a year’s wages for perfume). She breaks the jar and pours the perfume on Jesus’ head. “What a waste,” the people around Jesus are whispering. “Think of how many poor people that amount of money could have taken care of.” Don’t make extravagant sacrifices in front of some religious people. They’ll suck all the life out of it.

Anyway, Mark tells us this happens two days before “the Passover and the Festival of Unleavened Bread” while the religious leaders were making quiet plans to arrest and murder Jesus. That’s more than just a time note, as will become apparent.

Notice what the woman does. She breaks the jar. She doesn’t open it. She breaks it. Then she pours out the perfume on Jesus. Not a little, all of it. Because she broke the jar. And broken is broken. There’s no going back. Once she broke that jar she determined she was going to pour out all of that perfume. She left nothing in which to hold anything in reserve.

Jesus is touched by what she does. He connects her act with his death. He promises that people will hear about her act of extravagant love “wherever the gospel is preached throughout the world.” And, in fact, some version of the story is told in all four Gospels.

Interestingly, it’s only Mark who tells us that the woman broke the jar.

It seems like this event is the one that pushes Judas over the edge, because the next thing that happens is that he goes to the religious leaders to arrange the arrest and execution that they’re looking for. That will happen, we know, right after Jesus and the disciples eat a Passover meal together. And it’s that Passover meal that Mark goes on to describe next.

At that meal, of course, Jesus breaks the bread, gives it to his disciples to share, and says, “This is my body.”

And then he tells his disciples that the cup is his “blood of the covenant, which is poured out for many.”

Broken and poured. It isn’t just that the woman’s story is told as a point of interest wherever the gospel is preached. Her story is the gospel.

She didn’t give a little. Or even a lot. She gave everything. The bottle was broken and the perfume was poured out, and nothing was held in reserve. Broken is broken. There’s no going back.

What she did prefigured what Jesus was about to do, and he knew it. When Jesus gave himself “for many,” he didn’t leave an out. He didn’t give a little, or even a lot. He held nothing in reserve. “This is my body,” he said of that broken piece of bread. He poured out his blood to create a New Covenant.

Broken is broken. There’s no going back.

I imagine you get the point Mark is making. We who have received Jesus’ gracious offering of himself and are reminded of it and renewed by it each week at the Communion table, we have a responsibility as well. We learn to give by watching how our Lord did it. That unnamed woman* provides an example for us: to give of ourselves extravagantly, in a way that some might even consider irresponsible because they don’t understand the way our Lord has given himself for us.

Reading this story makes me think of what I hold back. Sure, I give some. A drop or two here or there. And it makes things smell nice, faintly of the gospel for a little while. But I hold some things in reserve, too. Some time. Some energy. Some emotional investment in people that just seems too exhausting. Sometimes I hold back some of my best because it’s just easier to give less. Some money, some possessions, some difficult choices that I don’t want to make. And so I give a little, and maybe now and then even a lot. But I keep a little something to fall back on. I hold back because breaking yourself open and pouring yourself out is hard. It’s scary. But of course there’s nothing to be afraid of, because whatever we give we’ll receive back exponentially from the Lord himself.

Broken is broken. There’s not going back. Be broken and pour yourself out for the gospel of Jesus.

*I’m aware that John says it was Mary, Martha’s and Lazarus’ sister. Mark doesn’t say that, though.