For if ony man is an herere of the word, and not a doere, this schal be licned to a man that biholdith the cheer of his birthe in a mirour;

for he bihelde hym silf, and wente awei, and anoon he foryat which he was.

But he that biholdith in the lawe of perfit fredom, and dwellith in it, and is not maad a foryetful herere, but a doere of werk, this schal be blessid in his dede. 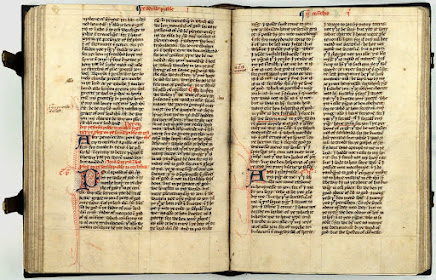 I have never in my life wanted Bibles as badly as my friend in Kenya wants them for his church. It isn't that I don’t appreciate the Bible. It’s that there are Bibles available to me everywhere I look. I’ve lost count of how many we have in our house. (Most of them mine: I’ve made something of a hobby of collecting different Bible translations!) We have them in every pew and in every classroom in our church. Of course, I have Bibles available in English and other languages online and on all of the devices I own. And if that’s not enough, I can drive a couple of miles and find a Bible to purchase, or go online and buy all I need.

I hope this series reminds you of that same excitement and encourages you not to take our easy access to the Bible for granted. People put themselves on the line to make the Bible readily available to us in English. They risked careers, livelihoods, even their lives. Some of them died for it.

As this series unfolds, I want us to understand that it isn’t just about history, and it isn’t academic. God’s blessing isn’t promised to those who merely listen to the word, but to those who do what it says. (I’m intending to quote that text, James 1:22-25, in a different English translation at the beginning of each of these posts.) Questions of translation - of how we listen - are secondary to questions of obedience. “What do we do with what we hear?”, this is by far the more important question facing believers. Every translation of the Bible succeeds or fails at the point of communicating Scripture to human beings. Every human being succeeds or fails at the point of putting Scripture into practice in our lives.

The story of the English Bible really begins with John Wycliffe. Wycliffe was a seminary professor at Oxford who in around 1384 directed the first full translation of the Bible into English. (There are differing scholarly opinions as to how much of the translation he was directly responsible for.)

Wycliffe wrote in what’s known today as Middle English. (Back then it was just called, I guess, English.) It was a Great Vowel Shift (and then some) away from English today, but you’d recognize it.

Here’s how it might sound if you were able to go back in time and listen to someone read from Wycliffe’s Bible in his day. (That’s probably how you would have first encountered it — orally.)

Prior to Wycliffe’s Bible, we know of translations of parts of the Bible into English that date back to the 600’s or 700’s, though we have no actual record of them. The oldest English translation of any part of the Bible that anyone in our day has seen is known as The Lindisfarne Gospels, an early 8th century manuscript of the Gospels in Latin, with a 10th century English gloss inserted between the Latin lines.

These early attempts at translation were in Old English — closer to German than it is to Modern English. They were all translations of the Vulgate — the Latin Bible translation that was widely regarded as the Bible in Wycliffe’s day. (And by Catholics up until the 1960s or 1970s.)

Wycliffe’s Bible was also a translation from the Vulgate — it would be another 150 years before anyone attempted to translate to English directly from the original Hebrew and Greek. Wycliffe would have considered the Vulgate a very reliable text (it was, in many ways), but was convinced people needed to read the Bible in their own language.

This conviction of Wycliffe’s came from his opinion that the clergy, monks, and Popes who ruled the church in his day had led their people into heresy and error. He believed that their pronouncements concerning the Bible were often wrong and even corrupted by their own interests. So he felt a responsibility to make the Bible available so that people could read it for themselves. His interest in a translation into the common language was not academic, it was practical. When confronted by someone who opposed his efforts — and there were many — he would often respond, “Christ and his apostles taught the people in that tongue that was best known to them. Why should men not do so now?" He believed that people needed access to the Bible to grow spiritually, and he believed that the Bible needed to be available to all people to drive what he viewed as needed reform in the church.

Wycliffe lived in a time before the printing press, when all books — including Bibles — were hand-written manuscripts. His Bible was disseminated widely by a group of roving preachers, the Lollards, who were connected to Wycliffe.

Wycliffe’s Bible translation activities, not to mention his views on reform, got him on the wrong side of the church. He eventually lost his post at Oxford. In 1384, shortly after his Bible began to be disseminated, he died of a stroke while saying Mass at the Lutterworth parish church. His followers continued editing and making his Bible available.

The church, in an effort to regain power lost or undermined in England by Wycliffe, persecuted his followers and eventually declared Wycliffe a heretic. In 1428, 44 years after his death, his body was ordered exhumed from consecrated ground by Pope Martin V and was burned and his ashes scattered in the river Swift. His writings were burned too, including his Bibles. Translation of the Bible into English by “unlicensed laity” was a crime punishable by charges of heresy.

Its popularity after his death, and the work that went into copying it, is evident when you consider that, almost 650 years after it was produced, and 600 years after the church ordered them burned, at least 250 manuscripts still exist.

We’re reminded by Wycliffe that Scripture should form us — individually and in communities — into the image of Christ. We’re also reminded that the Bible belongs to the church, not just its leaders. May we be faithful in the task of hearing it and allowing it to shape us as Jesus, the Word made flesh, wants us to be.