"That All of Them May Be One"

I pray also for those who will believe in me through their message, that all of them may be one,  Father, just as you are in me and I am in you.  May they also be in us so that the world may believe that you have sent me. I have given them the glory that you gave me,  that they may be one as we are one — I in them and you in me — so that they may be brought to complete unity.. 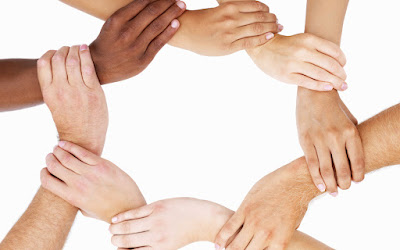 Like many of you who read this blog, I belong to a church that calls itself a “Church of Christ.” I’ve spent my entire life in Churches of Christ, and though I know something about our weaknesses and failures I have no regrets. (I imagine that’s largely because of the particular congregation I’ve spent almost 30 years of my life with.) There are things I love and deeply appreciate about our fellowship: our insistence that baptism and Communion matter, our willingness to let the Bible be our authority, our eclectic music tradition, our tendency to push against authoritarianism. But my favorite thing about us, I think, is that we are at heart a unity movement — even though we too easily forget it.

Without going too deeply into history you can dig up elsewhere, we came about after a wild collection of Presbyterians, Baptists, proto-Pentecostals, and who knows what else with a desire to just be Christians dared to imagine that they could jettison their denominational baggage and unite around Scripture. To me, it doesn’t matter that we haven’t always been true to that vision, and in fact some of us have been about as sectarian as anyone in Christendom. It doesn't matter that, to some degree, it was a naive hope to imagine that we could ever arrive at perfect unity based on the Bible. That impulse to be united was a noble one. It still is, even if we're a little more cynical than our forebears that it can be achieved.

Jesus’ prayer before his sacrifice was that those who believed in him would be one, just as he and the Father were one. That unity, he said, would come not from everyone agreeing about everything but from the glory of God that Jesus places in us. It would come when “the love [the Father has] for [the Son]” is “in them so that [Jesus himself] may be in them.” God’s glory and love — that’s where unity comes from. The reason we haven’t gotten there yet is because God’s glory and love are ever in need of renewal in us.

Unity’s hard, but it isn’t only up to us. That’s why Paul wrote that we should “make every effort to keep the unity of the Spirit through the bond of peace.” The Spirit creates that unity, the unity of the Father, Son, and Spirit, but we have to maintain it by keeping the bonds of peace strong. That work never ends.

So if you believe, like I do, that unity among believers is important, then let me suggest some tangible things you can do to help keep that Spirit-created, love-infused unity.

1. Pray for unity. Jesus did. Pray for people you know from other groups, denominations, and tribes, people you know who love Jesus but might see some things differently from you. You can pray for them to see the light, fine — but not before you pray that God will help you love them just as they are.

2. Repent of pride. If we don’t watch ourselves, we can really get proud of how we have “it” — whatever “it” is — right while everyone else has “it” wrong. If we do, it’s because of God and not our own righteousness. And “they” — whoever “they” is — probably have some things right that we have wrong. And having “it” right or wrong means nothing anyway without love, grace, and humility.

3. Refuse to caricature anyone else. Sometimes we aren’t fair to other groups, to their intentions or their efforts or their authenticity. We tend to compare the best examples of “us” against the worst examples of “them.” I grew up hearing  that Catholics don’t care about the Bible, for instance. Imagine my surprise when I discovered Catholic Bible scholars! I learned too-simple criticisms of Calvinist teaching that never acknowledged how Calvinists themselves discussed and worked through those problems. Paul reminds us to give each other some grace and assume that others want to please God as much as we do. Let’s do that.

4. Look for evidence that God is working through others who aren’t in “your” group. Jesus seemed genuinely shocked to find his disciples stopping someone from casting out demons in his name because they weren’t part of their group. “Why would you stop him?” he asked. You know why, don’t you? Sometimes we don’t want to admit that God might be doing something through this other group of Jesus-followers that aren’t much like us. But if God can use imperfect “us,” surely there are some imperfect “thems” he can use, too. Affirm it when you see it. Join in if you can.

5. Focus on Jesus. Read the Bible to see the story of God’s salvation as it narrows down to the teaching, life, death, and resurrection of Jesus. Not to learn how to win arguments and correct others. If you learn Jesus, you’ll start to look, sound, and act more and more like him. And then you’ll know how to discuss differences and help others grow through love and service.

6. Take small steps. Unity doesn’t just happen, especially where it’s been absent. I’ve been a part of an ecumenical Thanksgiving service in our neighborhood. I’ve been talking with some church leaders in the neighborhood about a regular “clergy” breakfast. Our church will be the meeting place for a group of religious leaders and police to discuss community needs. Maybe you’ll find common cause with members of other groups in a community food drive or a Bible study group. Maybe it’ll just be a friendly conversation with that other person at work who reads their Bible every day. Maybe you’ll read a book by someone outside of “your tribe.” Don’t cross any lines that you can't feel good about. But take a step toward understanding and appreciation.

7. Hold on to your convictions. Authentic unity isn’t least-common-denominator Christianity in which most every truth is relative. It happens when we love one another in spite of our differences, and begin to learn from each other. The differences that matter to us can help us to see how multi-faceted the kingdom of God can be. And how little of God’s truth any of us grasps by ourselves. Unity, contrary to what some might have you think, doesn’t require you to give up any convictions. It only requires that we give up pride, hostility, and arrogance.

8. Don’t let yourself be bullied into intolerance. Sometimes when you extend peace to someone who differs from you, others will say you’ve compromised. They’ll try to force you into line. That’s their fear talking, fear that in unity something is lost. Resist that. Truth has nothing to fear from dialogue and collaboration. Ignore your critics. Don’t let their fear turn you away from the unity Jesus prayed for. But do pray for them. Include them in your efforts for unity. The kingdom is big enough to encompass them and the people they can’t accept.

Again, none of this requires that you let go of any of your convictions, that you change anything that’s important to you. It only requires that you have a view of the world that allows for the possibility that you and the followers of Jesus you identify most closely with might not have cornered the market on truth, nor are you the only recipients of God’s grace. We are united with others who have put their hope and trust in what God has done for us through Jesus. Thinking alike about everything else is not possible, and not required.

May we look to the Father, Son, and Spirit, and find there a model for unity.

And may our unity be a witness to the world of what Jesus can do.