But as for you, continue in what you have learned and have become convinced of, because you know those from whom you learned it, and how from infancy you have known the Holy Scriptures, which are able to make you wise for salvation through faith in Christ Jesus. All Scripture is God-breathed and is useful for teaching, rebuking, correcting and training in righteousness, so that the servant of God may be thoroughly equipped for every good work. 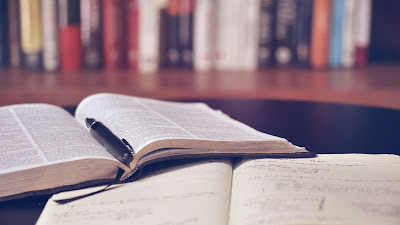 The church has always valued the Bible. We’ve always been rooted in and formed by it. Oh, we’ve sometimes disagreed among ourselves on how Bible authority works, but we’ve pretty much always agreed that it is our authority.

Increasingly, though, we live in a world in which the Bible’s authority isn’t taken for granted. Few outside the church — and even some inside it — see the importance of it. Maybe that’s you. Maybe you don’t think the study of the Bible is for you. You don’t teach Bible classes or preach. Maybe you don’t even like to read very much. Maybe there are some things in the Bible you’ve had a hard time understanding.

Or maybe it’s not so much understanding but acceptance: You’re wondering what millennia-old documents from ancient cultures, filled with fantastical and incredible events, offer to me as a guide for my life?

If any of that sounds like you, then I want to tell you that the study of the Bible is most definitely for you. Maybe you just need a little help. I’m not the last word, you understand, far from it, but I do preach and teach from the Bible every week. I’ve studied it really all my life. And maybe I can offer you some thoughts on how to make studying the Bible more profitable for you. I’m going to start by pointing you to 2 Timothy 3:14-17, which is one of the places that the Bible has something to say about the study of Scripture. It’s part of a letter from Paul, the apostle and missionary, to Timothy, a younger co-worker of his who he had left in charge of a church in the town of Ephesus.

The first thing I’d point out is that the Bible is “inspired.” Maybe you’ve heard that before, and even believe it. But most of us are dealing with all kinds of extra baggage when we hear that word. Lots of adjectives have been added to what Paul says about Scripture: “inerrant” (there are no mistakes), “infallible” (it cannot be wrong), and “literal” (it should always be interpreted at face value). Sometimes those adjectives have been made into a litmus test of faithfulness; if you don’t affirm them, you aren’t committed to biblical authority. But when Paul said that the Scriptures are “God-breathed,” he wasn’t saying that you have to believe in a literal six-day Creation or that God and Satan literally had a conversation about Job. (Nor was he saying that you shouldn’t believe either of those things.)

Paul was talking about the origin of the Scriptures, that they come from God, that they’re infused with God’s voice and vibrating with his life. That being the case, God can communicate in metaphor. He can speak to us through parable and even myth. Sometimes in the Bible he even speaks through the godless, faithless words and actions of those opposed to his purposes in the world. As we read the Bible, let’s leave off the extra adjectives we might want to attach to it and just go with “inspired.” Breathed out by God. When you read Scripture in all of its diversity and variation and eclectic kinds of literature, you’re hearing God’s voice.

Related to that, knowing the Bible isn’t the point. A lot of damage has been done in the world by people who know the Bible well. Much evil has been done by men and women who have studied the Scriptures and use them to justify and hide their misdeeds. Maybe that’s one of the reasons you don’t care to read it — you’ve been put off by the hypocrisy of some of those who have. Don’t read the Bible to win arguments or prove a point or assemble list of “gotcha” verses. Paul told Timothy that the Scriptures made him “wise for salvation through faith in Jesus Christ.” The point of reading the Bible is to know Jesus. To see God’s work of salvation in the world. To consider how we can be a part of it. Knowledge of the Bible won’t magically save you. But taking it into your heart and mind will point you toward the God who loves you and has already done his work of salvation in the world. It will lead you to faith in Jesus. It will rebuke, correct, train, and equip you to serve God and do good in the world.

Like Timothy in the letter, we should “know those from whom [we] learned it.” For us, that might mean being aware of the fact that none of us approach the study of Scripture with a blank slate. We’ve had people who have either encouraged or discouraged us. Some of us have families who modeled Bible study for us; others don’t. Some of us have been taught some unfortunate and untrue things regarding the Bible: that it’s riddled with “mistakes,” that it glorifies violence, slavery, and rape, that it’s responsible for a great deal of the evil in the world, that we don’t even have any idea what the Bible originally said. Others have been taught that it has authority, but have also learned some unhelpful ways to read it. Some of us want to hold on to interpretations of some parts of the Bible, correct or not, because we learned them from people whose experiences we value. All of us are affected by what we’ve already been taught about the Bible. But we still have the ability to distinguish those voices from Scripture itself, and determine for ourselves if what we’ve been taught is useful or not.

The very first thing Paul tells Timothy about Bible study is that  he should “continue in what [he’s] learned.” That’s important, that we should continue in what we learn from our study of the Bible. In that way, learning the Bible isn’t like memorizing trivia or picking up a new skill. It’s more like learning a new language, or a musical instrument; what you learn can only be realized in practical, everyday conduct shaped by this new thing. What’s in the Bible is intended to be practiced. Lived. To study the Bible is to recalibrate. It’s to change course. It’s to let the voice of God sink so deeply into our hearts that it changes our direction and helps us to live new lives.

If the Bible only confirms what you already believe, then I wonder if you’re really studying it and trying to continue in it. If you think there’s nothing more to learn there for you, then I think you may be skipping over the parts that challenge your convictions. Read it with the intention of bringing your study out into the reality of your day-to-day life. Live in your Bible study. Work out its implications, even the tough ones, in the way you conduct yourself in the world of work and school and neighborhood and home and church that you inhabit.

Of course, reading the Bible assumes that you’re using a translation that’s understandable to you. If you’re having trouble understanding yours, try a new one. There are many excellent English translations, and probably several choices if your first language isn’t English. I make some suggestions here, if you’re looking for any.

I’d also suggest that you study the Bible with other people. It’s a community book, not an individual one. We learn much when we hear it read and interpreted by others. Surely your church has some Bible classes available. If not, you can find them online, like these or these.

Whether any of this makes sense to you or not, I hope you’ll make sure that regular Bible study is a part of your life.

And may God bless you through it.