But be people who do the word, not merely people who hear it and deceive themselves. Someone who hears the word and doesn’t do it, you see, is like a man who looks at his natural face in a mirror. He notices himself, but then he goes away and quickly forgets what he looked like. But the person who looks into the perfect law of freedom, and goes on with it, not being a hearer who forgets but a deer who does the deed — such a person is blessed in their doing. 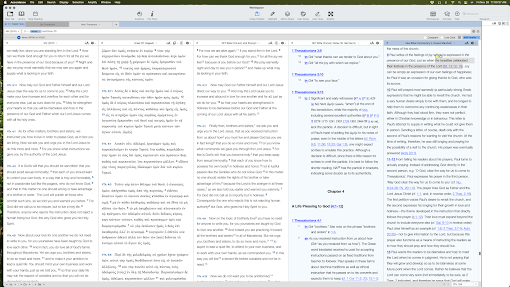 This is the tenth post in a series on the development of the English Bible. The series starts here, if you’d like to go back and review the older posts.

I thought I’d finish up these posts with a list of five translations I find myself using the most. Some of them we’ll have looked at already. A couple will be new. I’ll also include a list of three digital Bible study resources I use regularly. I’m including these, not because I think anyone ought to necessarily use what I use, but because it can be challenging to make heads or tails of the sheer number of translations, revisions, and paraphrases available in English. My list includes the translations I’ve found myself coming back to again and again.

First, a word about criteria. I choose to use — or not to use — a Bible translation for basically two  reasons:

A solid base text. All of the “witnesses” to the biblical text — full and fragmentary manuscript copies, versions in ancient languages, and quotations from church leaders older than any known manuscripts — need to be compared and collated. None are exactly alike, and so a lot of detective work has to be done to figure out what the original texts of the Bible actually said. The scholars who have done this work have produced Hebrew Old Testaments and Greek New Testaments with significant variant readings noted called critical editions. They’re the bases on which all good English translations rest.

So, roughly in order of usage, here are my top five English translations:

I could probably do another post on digital resources, and maybe I will sometime. The best variety of translations are on websites like Bible Gateway and YouVersion — both have 60 or more English translations available. Both also have reading plans, study guides, and other resources that you can use individually or with others, as well as useful mobile apps that give you access to Scripture from your phone or tablet. Monthly subscriptions give you access to other resources.

I also use Accordance Bible software, available for Mac, PC, iOS, and Android, which offers different modules that include numerous translations, commentaries, study notes, atlases, lexicons, dictionaries, and other resources, all cross-referenced with the text. Currently, the starter package is on sale for $49.95.

I hope this series of posts has been a blessing to you. If you’re struggling to read the Bible, maybe a new translation will help. If I can be of assistance, leave a comment or contact me.

May God bless you as a doer of the word.