But be doers of the word, and not hearers only, deceiving yourselves. For if any one is a hearer of the word and not a doer, he is like a man who observes his natural face in a mirror; for he observes himself and goes away and at once forgets what he was like. But he who looks into the perfect law, the law of liberty, and perseveres, being no hearer that forgets but a doer that acts, he shall be blessed in his doing. 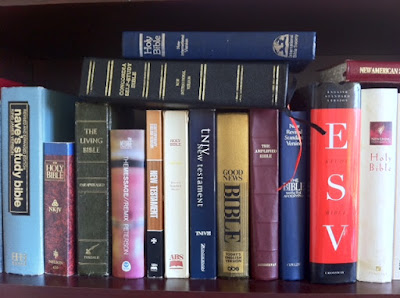 This is the seventh post in a series on the development of the English Bible. You can read about the reasons for this series here, and the second installment on John Wycliffe here. The third post on William Tyndale is here. The fourth on The Geneva Bible is here. The fifth on the King James Version is here. The sixth on nineteenth century English translations is here.

The 20th century was a good time for English Bible translations. The nineteenth century had produced great individual — if quirky — translations, though the King James Version was still the dominant English translation as the new century dawned. The Revised Version/American Standard Version had offered Bible readers the possibility of reading the Bible in more modern English grammar and style, though it had stopped short of full modernization to pay homage to King James. The 20th century, though, would bring the English Bible fully into, well, the 20th century. By the end of the century, there would be so many English Bible versions that it could be confusing. But most all were good, and many were excellent.

The first of these was the Revised Standard Version. Completed in 1952 (the New Testament was finished in 1946), the RSV was undertaken by the National Council of Churches, a union of 38 US denominations with the goal to produce a translation of the Bible that would "preserve all that is best in the English Bible as it has been known and used through the centuries" and "put the message of the Bible in simple, enduring words that are worthy to stand in the great Tyndale-King James tradition."

The RSV translation committee, a panel of 32 biblical scholars, used the standard Greek New Testament text of their day, the 17th edition of Nestle-Aland, and the standard Hebrew Masoretic text of the Old Testament. The RSV, however, was the first translation to make use of any of the recently-discovered Dead Sea Scrolls in translating the Old Testament, specifically Isaiah. The RSV also replaced archaic pronouns (“thee”/“thou”, “thy”/“thine”) with modern ones, except when referring to God.

The RSV was widely used among mainline denominations, but was criticized by many conservative church leaders for its translation of Isaiah 7:14 — “Behold, a young woman shall conceive and bear a son, and shall call his name Imman′u-el.” Every other English translation to that point used the word “virgin,” which fits with its use in the Gospel of Matthew as a fulfilled prophecy of Jesus’ birth. The Hebrew word almah, though, means a young woman — who may or may not be a virgin. Some conservative preachers were so incensed by a translation that they claimed undermined the Virgin Birth of Jesus that they burned RSV’s in their pulpits. This led one of the translators to joke that, in contrast to the fate of William Tyndale, who was strangled and then burned at the stake for his work,"...today it is happily only a copy of the translation that meets such a fate.”

The RSV has been revised twice itself. Its first revision, also by the National Council of Churches, was completed in 1989 and published as the New Revised Standard Version. The committee worked to create a translation that was “as literal as possible, as free as necessary.” The translation became known, positively by some, negatively by others, for its use of gender-neutral language wherever the text doesn’t intend to specify gender:

NRSV — “Then God said, ‘Let us make humankind in our image, according to our likeness…’”

A more “conservative” revision of the RSV is the English Standard Version, completed in 2001 by Crossway, the publishing arm of Good News Ministries. The ESV doesn’t use gender-neutral language as extensively as the NRSV, and has become popular among Christians who feel that the NRSV’s gender-inclusive language goes too far. The ESV was also marketed as being much more literal than versions like the NRSV and NIV, though that claim doesn’t always hold up to scrutiny.

In 1971, a private interdenominational Christian ministry, the Lockman Foundation, published the New American Standard Bible, a new English translation using the most current Greek and Hebrew texts but based on the wording and translation principles of the American Standard Version. The NASB translation committee was made up of scholars in the Bible and biblical languages across a spectrum of denominational backgrounds. It was offered as an alternative to the RSV. The translation produced is very literal in a “word-for-word” way that often preserves Greek and Hebrew word order, syntax, and figures of speech (“coals of fire” instead of “burning coals,” for instance). In service of this aim, it sometimes sacrifices readability. It was updated in 1995 and again in 2020 to smooth out the English, update figures of speech, and modernize archaic pronouns that refer to God.

In 1982, with the four-year-old NIV beginning to overtake the King James Version, Thomas Nelson published the New King James Version. The intent of the translators was to update the vocabulary and grammar of the King James Version, while preserving its style and literary beauty. Unlike the other translations mentioned here, the NKJV reverted to the use of essentially the same Greek New Testament text as the KJV had, largely ignoring nearly 400 years of biblical studies and leading to the NKJV including readings that most modern translations regard as not original.

The proliferation of English translations of the Bible in the 20th century was good for Bible readers. It also made it necessary for Bible publishers — often for-profit corporations — to differentiate themselves. They usually did this by marketing themselves as more accurate or more readable than the competition. Of course, the translators of most of these translations were all working from the same texts and with the same commitment to creating an accurate and readable Bible translation.

We should be thankful to live in a time in which the Bible is so accessible to English-speakers. Next time we’ll look at some other more recent developments in Bible translation.