Don’t fool yourself into thinking that you are a listener when you are anything but, letting the Word go in one ear and out the other. Act on what you hear! Those who hear and don’t act are like those who glance in the mirror, walk away, and two minutes later have no idea who they are, what they look like. But whoever catches a glimpse of the revealed counsel of God—the free life!—even out of the corner of his eye, and sticks with it, is no distracted scatterbrain but a man or woman of action. That person will find delight and affirmation in the action. 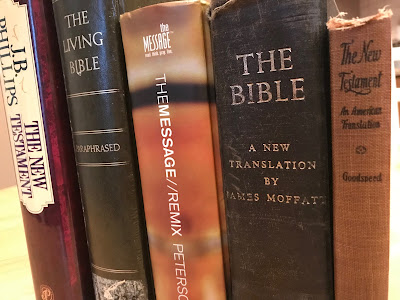 That’s certainly true of The Living Bible, a paraphrase written by Kenneth Taylor and published by Tyndale House in 1971. Taylor originally created The Living Bible to aid his kids in understanding the Bible. He used the American Standard Version as a base text, and didn’t consult any of the original languages; he simply rewrote the ASV using contemporary vocabulary, figures of speech, grammar, and measurements.

The Living Bible has sold over 40 million copies, and has been translated into about 100 languages. It had its critics, however; some found fault with what they called “dumbing down” of the biblical text. Bible scholars mostly ignored it, and some church leaders criticized it for perceived doctrinal biases.

You can see a good example of some of the strengths and weaknesses of The Living Bible in its handling of 1 Peter 3:18. The NRSV renders the verse: “For Christ also suffered for sins once for all, the righteous for the unrighteous, in order to bring you to God. He was put to death in the flesh, but made alive in the spirit…”

The Living Bible reads: “Christ also suffered. He died once for the sins of all us guilty sinners although he himself was innocent of any sin at any time, that he might bring us safely home to God. But though his body died, his spirit lived on…” While the language is contemporary and understandable, it clearly interprets more than it translates. (Note how it explains what “the righteous for the unrighteous” means.) Some of its interpretations are debatable, as when it renders “put to death in the flesh, but made alive in the spirit” as “though his body died, his spirit lived on.” That reading leaves in question the bodily resurrection of Jesus, incorrectly makes “flesh” equivalent to “body,” and assumes that “in the spirit” is a reference to Jesus’ human spirit and not the Holy Spirit.

In the late 1980s, Taylor and Tyndale House Publishers invited a team of 90 Greek and Hebrew scholars to revise The Living Bible. It was published in 1996 as The Holy Bible: New Living Translation.

Another example of a paraphrase written by an individual is The Message, by Eugene Peterson. Peterson was a Presbyterian church leader in Maryland who felt the need for a translation that would “bring the [Bible] to life for…those who hadn't read [it] because it seemed too distant and irrelevant and those who had read [it] so much that it had become ‘old hat.’” He thought of his translation as an extension of his work as a pastor: "always looking for an English way to make the biblical text relevant to the conditions of the people."

The Message uses American expressions and slang to a degree not seen in any other translation. A vivid example is found in Peterson’s translation of the Lord’s prayer: “God, Our Father in heaven, reveal who you are. Set the world right; do what's best— as above, so below. Keep us alive with three square meals. Keep us forgiven with you and forgiving others. Keep us safe from ourselves and the Devil. You’re in charge! You can do anything you want! You’re ablaze in beauty! Yes. Yes. Yes.”

As you can see, the translation is very interpretive in some places: “reveal who you are” instead of “hallowed be your name,” “set the world right; do what’s best” for “your kingdom come, your will be done.” The Message can open up new understandings of biblical texts, but sometimes at the expense of other possible meanings obscured by its choice of words. On the whole, The Message is probably best as a secondary Bible, not one used for serious study and reading.

The Bible: A New Translation was published by Scottish theologian and minister James Moffat in 1922. Moffat’s intent was “to offer the unlearned a transcript of the Biblical literature as it lies in the light thrown upon it by modern research.” C.S. Lewis and Martin Luther King, Jr. often used Moffat’s translation. The translation was one of the first to tend toward paraphrase. It was quirky in that Moffat rearranged the order of chapters and verses based on his judgments about the content, authorship, and historicity of the texts. He also used different typefaces throughout the first five books of the Old Testament to indicate his opinions concerning a widely-held (and now outdated) theory about authorship. These quirks make it a difficult translation to use, though it is very readable and understandable. (Though the “modern” language now sounds a little dated!)

In 1931, Edgar Goodspeed, a professor at The University of Chicago, published The Bible: An American Translation. Like Moffat, Goodspeed’s intent was to offer a translation “based upon the assured results of modern study, and put in the familiar language of today.” As the first Bible translation to use an “American” English, Goodspeed’s translation was controversial, but influenced the others in this post. It was also influential for  J.B. Phillips, who in 1958 published the very popular The New Testament in Modern English, originally written for the youth group at the church he pastored.

English translations of the Bible need to be accurate — true to the original text — and they need to be understandable. But it isn’t quite that easy. A translation that is very true to the original text but not understandable is not accurate, because it doesn’t communicate the message of the Scriptures to people. All translations grapple with the necessity of being understood. As the ones we’ve looked at show, all aim to keep the words of God from “going in one ear and out the other”so that we can “act on what we hear.”

May we be faithful.