Do not deceive yourselves by just listening to his word; instead, put it into practice. If you listen to the word, but do not put it into practice you are like people who look in a mirror and see themselves as they are. They take a good look at themselves and then go away and at once forget what they look like. But if you look closely into the perfect law that sets people free, and keep on paying attention to it and do not simply listen and then forget it, but put it into practice—you will be blessed by God in what you do. 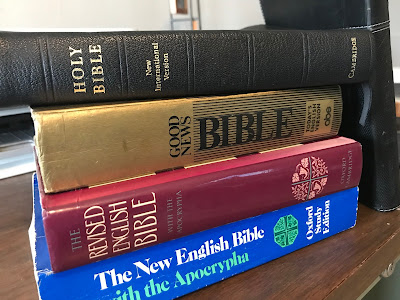 In the last post we looked at twentieth century translations within the King James Version “family.” In this one, we’ll take a look at several committee translations that are distant relations at best.

The first of these chronologically was the New English Bible, published by Oxford University Press and Cambridge University Press (1961 New Testament, 1970 Old Testament). It was translated by three committees of biblical scholars and a panel of literary advisors to help shape the English. The result was a striking translation of beautiful English style that was unlike any English Bible that had come before it.

The New English Bible was based on the theory of dynamic equivalence; instead of translating word-for-word, the translation committees used a "thought for thought" strategy, translating the meanings of phrases or whole sentences instead of individual words. C.H. Dodd, a member of the translation committee, explained that the translators "...conceived our task to be that of understanding the original as precisely as we could... and then saying again in our own native idiom what we believed the author to be saying in his.”

As an example, John 1:1 in the Revised Standard Version says, “In the beginning was the Word, and the Word was with God, and the Word was God,” which is unchanged from the King James Version. The NEB, on the other hand, translates: “When all things began, the Word already was. The Word dwelt with God, and what God was, the Word was.” While it isn’t as literal a translation of the Greek, and doesn’t sound like the KJV, it’s still a very accurate and arguably more understandable translation.

The NEB was generally well-received when it was published, but it has its drawbacks. It’s very British in style and vocabulary, which can make it less useful for Americans. The NEB also fairly frequently rearranges the order of verses and chapters to line up with the translators’ opinions about the original text, which can make it difficult to use. A 1989 revision, called the Revised English Bible, removed many of the Britishisms and most of the rearrangements of the text.

Around the same time, in America, another attempt was being made to disentangle the English Bible from the Tyndale/King James Version style and vocabulary. This completely new translation has gone by several names: The Good News Bible, Today’s English Version, and currently The Good News Translation. It was developed by the American Bible Society to respond to a need among missionaries in Africa and the Far East for an English Bible that was easy to understand. The GNT New Testament was published in 1966. The Old Testament was published gradually between 1970 and 1975. In 1976, the full Bible was published as The Good News Bible: The Bible in Today's English Version.

Strong sales of the GNT showed that there was a market for a somewhat freer but more readable translation. Our next translation tapped into that market to ultimately become the first to displace the King James Version as the best-selling English translation in the world. The New International Version, published in 1978 by the International Bible Society (now called Biblica), was developed by a committee of 15 evangelical scholars on the principles of dynamic equivalence. In addition to using the standard scholarly Greek and Hebrew texts as the basis for their translation, the committee also consulted many other sources, especially in the Old Testament. Extensive notes on the text are included, especially where compelling alternate readings are found.

The NIV has been criticized (as every translation is) for some of its choices. While in some places it is free, it is often quite literal as well. Some areas of critique have included translating the word sarx in Paul’s letters as “sinful nature” instead of the more literal “flesh.” (But most English-speakers today think of the physical body when they think of “flesh,” and that’s not all that Paul has in mind when he uses the word.) In some cases, the NIV does interpret instead of simply translating, as in Luke 11:4, where the NIV has "for we also forgive everyone who sins against us" instead of the more literal "for we also forgive every one that is indebted to us” (though the context indicates that the “debt” is wrongs committed against the one praying).

The NIV was updated in 1984, 1999, and 2011. There was also a 1996 revision in the UK that incorporated gender-neutral language, but it wasn’t published in the US due to significant opposition from evangelical groups. Many of those revisions were finally incorporated into the 2011 update and/or in 2005’s Today’s New International Version. The NIV has also been the basis for countless study Bibles and specialty Bibles. It has sold over 450 million copies, and is the best-selling English translation in the world.

As we’ve seen, the Tyndale/KJV tradition dominated English Bible translation for centuries. Translators were wary of sounding too different from the Bible that all Protestant readers — and many Catholics — were accustomed to. But the many twentieth century English translations that updated or departed from the KJV style remind us that Bible translation should be ever-evolving. Jesus said that his words never change; but as language changes, so does the way we hear him. A Bible translation is only successful to the degree that it makes God’s unchanging words known to always-changing human beings.