And be ye doers of the worde, and not hearers onely, deceauing your owne selues. For if anie heare the worde, & do it not, he is like vnto a man, that beholdeth his natural face in a glasse. For when he hathe considered him self, he goeth his way, & forgetteth immediatly what maner of one he was. But he who so loketh in the perfit Law of libertie, and continueth therein, he not being a forgetfull hearer, but a doer of the worke, shalbe blessed in his dede. 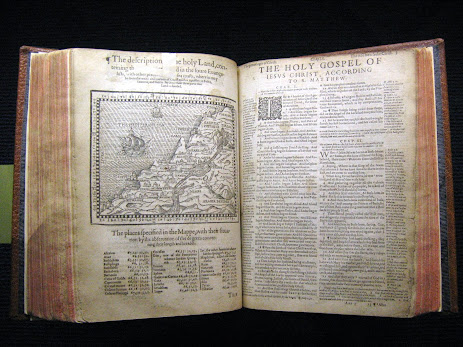 This is the fourth post in a series on the development of the English Bible. You can read about the reasons for this series here, and the second installment on John Wycliffe here. The third post on William Tyndale is here.

By the middle of the 17th century, William Tyndale’s work fifty years earlier had opened the door for several new English translations. The Great Bible was a revision of a revision of Tyndale, authorized by King Henry VIII in 1539 to be read in churches, (and sometimes literally chained to the pulpits). Tyndale’s translations still circulated in various forms. It was easier than ever before for an English-speaking person to hear the Bible read in their own language.

Religiously, the death of Henry VIII in 1547 had ushered England into a protracted religious war between Catholics and Protestants that reflected the Protestant leanings of Henry’s son, Edward VI, and the Catholic preferences of Edward’s half-sister, Mary I, who succeeded him on the throne and undid many of his Protestant reforms.

Mary’s “bloody” 5-year reign — she had 280 religious dissenters burned at the stake — caused a wave of Protestant emigration to Europe. Many of those emigrants found their way to Geneva, Switzerland, which due largely to John Calvin’s influence had become a safe haven for Protestants. Among the group in Geneva were biblical scholars William Whittingham, Christopher Goodman, Anthony Gilby, Thomas Sampson, William Cole, and William Tyndale’s former collaborator Myles Coverdale. These scholars worked together to create an English translation of the Bible from the original Greek and Hebrew, and is the first English Bible in which the entire Old Testament is translated from Hebrew. The New Testament was completed in 1557, and the Old Testament in 1560.

The English style and word choices of the Geneva Bible largely reflects Tyndale in the New Testament, emphasizing how important Tyndale’s translation really was, even as it was surpassed in popularity by the Geneva Bible.

Geneva was produced in a smaller format and a more legible typeface than the Great Bible. It contained study guides and aids including cross-references, introductions and summaries of each book, maps, tables,  explanatory notes, and woodcut illustrations. It was also the first English translation to number each verse using the system created by Robert Estienne (which is still used today).

The Geneva Bible was comparatively affordable, making it ideal for families. It was mechanically printed and mass-produced, and became hugely popular in England, especially after Mary’s reign ended in 1558 (between the completion of the Geneva New Testament and the complete Bible). It went through around 140 editions.

It’s hard to overstate the Geneva Bible’s influence. It was the Bible quoted by William Shakespeare in his later work, and the Bible that was brought to the new world at Jamestown and Plymouth. It was used by English Protestant separatists like the Puritans for a century, and was quoted by John Bunyan in Pilgrims’ Progress, one of the best-selling English books ever written. A 1579 law passed in Scotland required every household of sufficient means to buy a Geneva Bible.

It influenced even its detractors. The English church didn’t care for its notes, which emphasized Calvin’s views on church organization — that it was to be led by elders, not powerful bishops. The royals didn’t care for the “seditious” nature of some of its notes that advocated disobedience to the monarch; Queen Elizabeth I commissioned a revision of the Great Bible, known as the Bishops’ Bible and completed in 1568, for this very reason. Thirty-six years later, King James I would commission another English translation that would become somewhat influential in its own right after its publication in 1611. The King James Version, as it came to be called, intentionally did not include marginal notes. It likely wouldn’t have existed at all if not for the Geneva Bible.

In time, the King James Version would supplant the Geneva Bible, but initially Geneva outsold the KJV. Eventually, King James felt it necessary to ban the printing of new editions of the Geneva Bible in England. However, the royal printer, Robert Barker, continued to print them even after the ban, placing the  date of 1599 on new copies printed from 1616 to 1625.

The zeal of Protestants in producing the Geneva Bible, and its influence, also influenced Catholics to publish their own English translation (from Latin, though, not Hebrew and Greek), the Douay-Rheims Bible, between 1582 and 1610.

The Geneva Bible represents a paradigm shift. Where earlier English translations were mostly kept in churches, where clergy could still act as caretakers, Geneva released the Bible into the wild. Scripture — and notes on it from eminent scholars of the day — were available to anyone who could read, or had someone to read to them. A wider range of views on Scripture became available to people who up until that time had only heard their local clergy’s take. Children could grow up hearing the Bible read in their homes every day.

There was a definite and noticeable increase in literacy rates in England from the 16th to the 18th centuries. It’s hard to say for sure that access to Scripture in their own language and in their own homes was part of the motivation for middle class, tradesmen, and farmers and day laborers to join the upper classes in knowing how to read, but I think it’s pretty likely.

In some ways, the publication of The Geneva Bible anticipated our own world, where Scripture is available easily and cheaply to us. One fairly recent study found that 87% of American households own a Bible, and that the average number of Bibles per household is 3. That study, of course, has only to do with hard copies of the Bible. It doesn’t take into account the huge number of translations available to English-speakers on digital resources like Bible Gateway (62) and YouVersion (68).

Of course, our reading for the past 4 weeks reminds us that hearing (or reading) the Bible does little if we walk away from it and forget the reflection of ourselves — all of our potential and all of our faults — that we see there. Let’s hear the Bible, for sure. Let’s read it. It’s certainly more available to us now than it’s ever been. But let’s also allow what we hear and read to define us and how we see and act in the world around us. May we not be “forgetfull hearer(s),” but “doer(s) of the worke” who live in “the perfit Law of libertie” and receive God’s blessing because of it.