But be ye doers of the word, and not hearers onely, deceauing your owne selues. For if any be a hearer of the word and not a doer, he is like vnto a man beholding his naturall face in a glasse: For hee beholdeth himselfe, and goeth his way, and straightway forgetteth what maner of man he was. But who so looketh in the perfect Law of libertie, and continueth therein, he being not a forgetfull hearer, but a doer of the worke, this man shall be blessed in his deed. 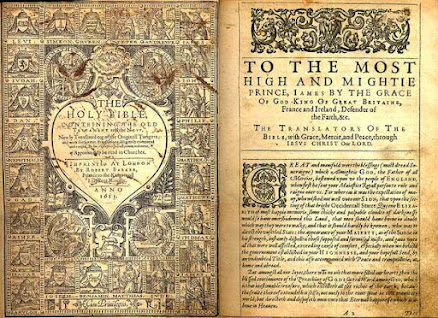 This is the sixth post in a series on the development of the English Bible. You can read about the reasons for this series here, and the second installment on John Wycliffe here. The third post on William Tyndale is here. The fourth on The Geneva Bible is here.

When James VI and I* came to power in England in 1603, the Bishops’ Bible was the Bible read in the churches of England. The Bishops’ Bible, completed in 1568, was a revision of The Great Bible — the earlier “official” Bible of the English church — in light of The Geneva Bible. It was never as popular as Geneva. Neither was its scholarship as rigorous, nor its English as good. By 1604, there were calls from both State and Separatist church leaders for a new version.

After a conference with Puritan and Anglican Church leaders at the Hampton Court palace, James VI/I ordered that a translation committee be formed and that work on the new translation should begin as soon as possible. All of the 47 men who made up the committee were members of the Church of England, and all but one were clergy. The translators worked in six groups, two at Oxford, two at Cambridge, and two at Westminster Abbey. The new translation was just called The Authorized Version, but it eventually became better known by the name of the monarch who authorized it: The King James Version.

To keep the new translation familiar, the Bishops' Bible was used as the basis, meaning that in many ways the King James Version was a revision and not a completely new translation. Forty unbound copies were printed for the translators so that they could note changes in the margins. For places where the Bishops’ Bible was thought to be problematic, the translators were allowed to consult Tyndale and the other existing English translations. The flyleaf of most printings acknowledges this when it says that it was "translated out of the original tongues, and with the former translations diligently compared and revised, by His Majesty's special commandment.” Just a reminder from the translators that they stood on the shoulders of those who came before, especially of William Tyndale, who it’s estimated influenced 80-90% of the King James Version both directly and through the other translations he influenced. This also means that the English of the KJV is more like the English of the early 1500s than of the early 1600s.

The KJV is likely the most printed book in history, which means that  it was revised numerous times, sometimes sloppily — a notorious 1631 edition has Exodus 20:14 saying, “thou shalt commit adultery.” (A mistake which cost the printer his royal license.) Cleaning up typographical errors and following changing standards in spelling and punctuation required frequent new editions. A King James Version reader today is probably reading an edition of the Oxford text from 1769, after which the KJV became more or less standardized.

At the time of its development, the King James Version was based on the best Hebrew and Greek manuscripts available to the translators. For the New Testament, the translators had available Beza’s Greek New Testament, based on mostly 12th- and 15th-century manuscripts. For the Old Testament, they used Daniel Bomberg’s edition of the Masoretic Text, which dated to the 10th century. While these were the best manuscripts available in their day, biblical scholarship has pushed the earliest available complete or near-complete New Testament manuscripts to the 4th century, with fragments perhaps dating to the 3rd century. The discovery of the Dead Sea Scrolls made available Old Testament manuscripts that are dated as far back as the 2nd century B.C. Some of these have significantly different readings than the later texts. Developments in the study of ancient Near Eastern languages have also caused a reevaluation of some the KJV’s translations of Hebrew words. While a minority of scholars insist on the superiority of the later Greek and Hebrew texts on which the KJV is based — nearly all of them to prop up their claims about the KJV — almost all modern translations are based on the older manuscripts. This is nothing that should surprise us, as we’d expect that study of biblical languages would progress over the space of 400 years.

Because of its inferior text base and its long-outdated English, the KJV is not recommended for serious study of the Bible. Much of its language, though, just sounds like the Bible for many people. There’s no doubt that many of its expressions have helped to form our language even today — though some of those choices go beyond the KJV to Tyndale. A combination of excellence, royal and ecclesiastical favor, and market realities made the King James Version the dominant version of the Bible for the Protestant English-speaking world for well over 400 years. Many of us memorized Bible verses in “King James” English.

Despite the easy availability of better and more understandable translations, a significant number of Christians still love and read the King James Version today. There is even a small number of Christians who believe that the only faithful translation of the Bible is the 1611 KJV — and some of them even make the startling claim (never made by the original translators) that the KJV was inspired by God.

It wasn’t. No translation of the Bible is inspired, or even perfect. Every one of them requires trade-offs of literal accuracy for understandability. (Homework assignment: find out why the King James Version has some words printed in italics.)

The King James Version of the Bible was a very good and sometimes even excellent translation for its time. Through it, uncounted numbers of people came to faith in Jesus, grew in their walk with him, and were comforted and encouraged through difficult times. Through it, the Bible was heard and read in churches, homes, workplaces, and schools throughout the world. It was never intended to be the final word in Bible translations. If you enjoy reading it, please continue. If you struggle to understand it and don’t read the Bible much because of it, set it aside and get a more recent translation. And even if you understand it well, take advantage of the easy availability of more understandable and better translations to widen and deepen your knowledge of Scripture.

“Thou shalt be blessed above all people.” (Deuteronomy 7:14, KJV)

*He had ruled Scotland as James VI since 1557. After the union of Scottish and English crowns in 1603, he also ruled England and Ireland as James I.