And se that ye be doars of the worde and not hearers only deceavinge youre awne selves with sophistrie. For yf eny heare the worde and do it not he is lyke vnto a man that beholdeth his bodyly face in a glasse. For assone as he hath loked on him silfe he goeth his waye and forgetteth immediatlie what his fassion was. But who so loketh in the parfaict lawe of libertie and continueth ther in (yf he be not a forgetfull hearer but a doar of ye worke) the same shall be happie in his dede. 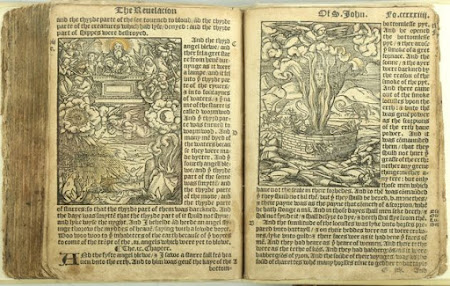 This is the third post in a series on the development of the English Bible. You can read about the reasons for this series here, and the second installment on John Wycliffe here.

As this series unfolds, I want us to understand that it isn’t just about history, and it isn’t academic. God’s blessing isn’t promised to those who merely listen to the word, but to those who do what it says. (You’ll find that text, James 1:22-25, quoted in a different English translation at the beginning of each of these posts.) Questions of translation — of how we listen — are always secondary to questions of what we do.

In this post, we’ll look at the work of William Tyndale, an Oxford scholar who was the first to translate the original Hebrew and Greek of the Bible into English. Not only was he first; his work was so formative for what came after him that he’s often called the father of the English Bible.

“In so great diversity of spirits how shall I know who lieth and who saith truth? Whereby shall I try them & judge them? Verily by God’s word which only is true.”

The reason this quote from Tyndale sounds so contemporary, despite being half a millennium old, is that what’s true and what’s not, and how we can know, is one of those human questions that we’re always asking and never quite able to answer — other than that we need a standard outside of ourselves. Tyndale came to believe as a young man that every human being, whatever their station in life, should have access to the Bible so that they could know truth. While his most famous quote — supposedly in answer to a church official opposed to his intention to translate the Bible into English — might well be apocryphal, it accurately represents the way he thought:

“If God spare my life, ere many years I will cause a boy that driveth the plow shall know more of the Scripture than thou doest."

As William Tyndale grew to adulthood in England during the first decades of the 16th Century, a renaissance of classical scholarship was happening all over Europe. For the first time in centuries, the Greek language was accessible because of the influx of Greek scholars and texts to Europe after the fall of Constantinople in 1453. Erasmus compiled the first critical edition of the Greek New Testament in 1516. Johann Reuchlin published a Hebrew grammar in 1506. Martin Luther, using Erasmus and Reuchlin, published a German Bible translated from the original Greek and Hebrew (and not Latin) in 1522. Bible translations in the commonly-spoken languages of Europe were popping up everywhere — except in England, where after Wycliffe’s English translation had caused such a stir a century and a half earlier it was punishable by death to be caught with an “unlicensed” Bible. Tyndale intended to change this.

In 1523, while studying theology at Oxford, Tyndale sought a license from the church for an English translation of the Bible, but was refused. The next year he left for continental Europe. By 1525, he had finished his translation of the New Testament from Greek, using Erasmus’ Greek text. It was published from Worms and Antwerp, and copies were smuggled into England and Scotland, though it was condemned and burned in public. Tyndale was condemned as a heretic in England for his translation and other writing, so he remained in Europe, in hiding in Hamburg, where he revised his New Testament, began working on his Old  Testament,  and wrote in opposition to Henry VIII’s planned annulment of his marriage to Anne Boleyn. He was eventually betrayed and imprisoned in Europe, extradited to England, and executed in October 1536.

Tyndale coined many words that we take for granted in our Bible reading: passover, scapegoat, mercy seat, and long-suffering among many possible examples. He was the first to use “love” instead of “charity” and “repentance” instead of “penance.” Many of the popular phrases and Bible verses that have endured in modern English translations come to us word for word from Tyndale. Expressions like "Blessed are the peacemakers,” “the salt of the earth,” “daily bread,””shepherds abiding in the field,” “eat, drink, and be merry,” “only begotten Son,””in whom we live and move and have our being,””in the twinkling of an eye,” “singing and making melody in your heart,” and many others could have been translated differently, but Tyndale’s ear made them memorable. We can see through his work that translation isn’t a robotic exchange of one word or phrase or sentence for another, but an art form.

Tyndale’s translation, and many of the word choices he used, provoked anger from the church. His  example reminds us that when people would use biblical words to control and manipulate others, perhaps the most faithful thing we can do is to use different words, to translate Scripture always into a language that can be understood so that as many people as possible can have access to truth.

Tyndale’s last words, seemingly, were, “Lord! Open the King of England's eyes!” A year after his death, his sometime collaborator Myles Coverdale and John Rogers produced an English Bible published pseudonymously under the name Thomas Matthew. The Matthew Bible used Tyndale’s translations almost unchanged. Three years after his death, Coverdale was employed by King Henry VIII to produce an “authorized” English Bible to be placed in every English church. His work, called The Great Bible (for its size), again used Tyndale’s New Testament and his completed Old Testament. People flocked to church to hear the Great Bible read — so much so that some of the priests complained because their congregants preferred to hear the Scriptures read over their preaching!

In 1560, 24 years after his death, the group responsible for the Geneva Bible — Coverdale included — substantially used Tyndale’s translations as their basis. And in 1611, nearing a century after his death, his language heavily influenced the choices of the translators of King James I’s Authorized Version. It has been estimated that 80 - 90% of the King James Version is attributable directly or indirectly to William Tyndale.

Maybe that’s Tyndale’s great legacy: to give us hope that what we do to make God known in our world might accomplish his purposes, even if we don’t see it ourselves. God can open the most unseeing eyes, and so our work for him is far more significant than we know.

May we be faithful in the ongoing work of translating the Bible, especially the words and work of Jesus, into language the people around us can hear and see.