And be doers of the word, and not hearers only, deceiving yourselves by false reasoning. For if any one be a hearer of the word, and not a doer, he is like a man who views his natural face in a mirror; for he who looks at himself and goes away, and immediately forgets what kind of person he was. But he who looks narrowly into the perfect law of liberty, and perseveres, not becoming a forgetful hearer, but a doer of its work, shall, in so doing, be happy. 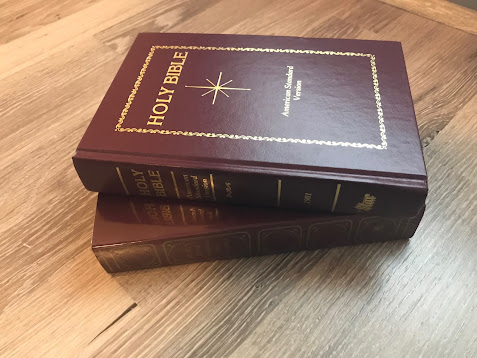 This is the sixth post in a series on the development of the English Bible. You can read about the reasons for this series here, and the second installment on John Wycliffe here. The third post on William Tyndale is here. The fourth on The Geneva Bible is here. The fifth on the King James Version is here.

By the nineteenth century the King James Version, already 200 years old but still the dominant English translation of the Bible, was showing its age. Developments in biblical scholarship and the translation of ancient Near Eastern languages had highlighted its deficiencies. More significantly, the 300-year-old English of the King James Version was becoming more difficult for the average reader to understand.

Several attempts were made in the nineteenth century to update the KJV. Notably for those of us in Churches of Christ, The Living Oracles (1826) was one of the first efforts. The Living Oracles, which was a translation of only the New Testament, was published by Alexander Campbell, an early Restoration Movement leader. Campbell believed that changes in the English language and the availability of better Greek and Hebrew manuscripts had made the KJV obsolete. He used a Greek text published by Johann Jakob Griesbach that took into account the latest manuscript evidence. A quirk of the translation is that it replaces the word "church" with "congregation" and "baptize" with “immerse,” which made it popular among Restoration Movement Christians and others who believed in baptism by immersion, but suspect among other groups. The Living Oracles is a forerunner of modern language translations in its updating of the traditional KJV English and reliance on the work of textual critics such as Griesbach.

Noah Webster, of dictionary fame, lightly revised the KJV in 1833. He focused mostly on replacing archaic words and making small grammatical changes since he didn’t want to make his version sound completely contemporary, but to remove some of the barriers to understanding the KJV.

Robert Young, a publisher self-taught in Greek, Hebrew, and Aramaic, produced his own “Literal Translation” of the Bible from Hebrew and Greek in 1862. However, he used the same outdated Greek and Hebrew texts used by the KJV translators, and his translation wasn’t that much of an improvement in making the Bible understandable since he used a very literal translation philosophy that insisted on preserving Greek and Hebrew word order and tense.

Similarly, Julia Smith Parker, the daughter of a Congregationalist minister with a “working knowledge” of Greek and Hebrew produced a very literal and idiosyncratic translation in 1855, finally publishing it in 1876. She was the first and is still the only woman to produce an individual English translation of the Bible.

J.N. Darby’s translation (1867/1890) was based on the work of Samuel Tregelles, who had recently published a Greek New Testament based on the best manuscripts available throughout Europe. It was intended to be “as exact a translation as possible" for the “simple and unlearned reader.”

By the end of the 19th century, bishops of the Anglican Church agreed on the necessity of a new English translation that would retain the KJV text "except where in the judgement of competent scholars such a change is necessary.” The resulting translation, the Revised Version of 1885, was intended "to adapt King James' version to the present state of the English language without changing the idiom and vocabulary," and "to adapt it to the present standard of Biblical scholarship.” The RV updated language and utilized the better manuscripts that had come to light in the 350 years following the publication of the KJV. The translation committee of more than 50 was made up of British and American scholars  from many different denominations in the UK and the States.

The Revised Version, which ended up being a very literal and flat translation, was never very popular. Its Americanized revision, the American Standard Version (1901), sold much better, but was still not able to challenge the dominance of the King James Version. The ASV, though, has had lasting influence in that it has been the basis for several other translations, revisions, and paraphrases, including the Revised Standard Version (1952), the New American Standard Bible (1971, revised in 1995), The Living Bible (1971), the New Revised Standard Version (1989), and the English Standard Version (2001). Many of these have become popular and widely used among English-speaking Bible readers. The NRSV is officially approved by several mainline Protestant denominations for use in worship, and is the preferred version of the majority of Bible scholars due to its strong textual base and largely word-for-word translation philosophy. The English Standard Version is currently the fourth best-selling English translation. We’ll look at several recent translations in the next post.

None of these potential replacements for the King James Version have been without controversy. Most any time a new Bible translation is published, there are objections to what are perceived to be changes from an earlier, perfect, pristine Master Bible that God dropped from heaven. Of course it’s not that simple. The originals of every book of the Bible are long gone. It would be amazing to have even part of a manuscript stained with Jeremiah’s tears or the dust from one of Paul’s journeys, to read a psalm from a page that David touched or the words of Jesus written in the hand of someone who heard them spoken. The Bible just doesn’t work that way.

Always, it’s been people who God has used to preserve the biblical text. People like Phoebe — probably the first person to read the letter to the Romans in church; or some unnamed person in an Asian church who first said, “Someone should copy Paul’s letters so they don’t get lost;” or a Jewish scribe laboring over a text that he had no way of knowing would be found thousands of years later in a desert cave; or a scholar comparing some of those ancient copies of still more ancient manuscripts to reconstruct what Jesus or Paul or David or Jeremiah actually said or wrote or sang; or people who have worked hard to translate those words into hundreds and hundreds of languages and dialects. People have always been part of God’s work of making the Bible available to the world.

New translations are always necessary because language evolves and understanding of the biblical text grows and changes. The KJV translators said it best, perhaps:

“Translation it is that openeth the window, to let in the light; that breaketh the shell, that we may eat the kernel; that putteth aside the curtaine, that we may looke into the most Holy place; that remooveth the cover of the well, that wee may come by the water…”